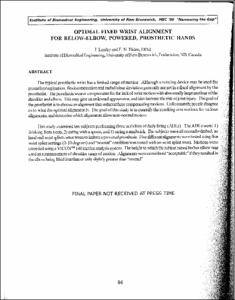 View / Download
82.7 Kb
Date
Authors
Landry, J.
Biden, E. N.
Repository Usage Stats
360
views
121
downloads
Abstract
The typical prosthetic wrist has a limited range of motion. Although a rotating device may be used for pronation/supination, flexion/extension and radial/ulnar deviation generally are set in a fixed alignment by the prosthetist. The prosthesis wearer compensates for the lack of wrist motion with abnormally large motions of the shoulder and elbow. This may give an awkward appearance, and also increase the risk of joint injury. The goal of the prosthetist is to choose an alignment that reduces these compensating motions. Unfortunately, people disagree as to what the optimal alignment is. The goal of this study is to quantify the resulting arm motions for various alignments, and determine which alignments allow near-normal motion. This study examined ten subjects per forming tluee activities of daily living (ADLs). The ADLs were 1) drinking ftom a cup, 2) eating with a spoon and 3) eating a sandwich. The subjects were all normally-limbed, so hand and wrist splints were worn to imitate a powered prosthesis. Five different alignments were tested using five wrist splint settings (0-10 degrees) and "normal" condition was tested with no wrist splint worn. Motions were recorded using a WON' 140 motion analysis system The height to which the subject raised his/her elbow was used as a measurement of shoulder range of motion. Alignments were considered "acceptable" if they resulted in the elbow-being lifted less than or only slightly greater than "normal". FINAL PAPER NOT RECEIVED AT PRESS TIME
Permalink
https://hdl.handle.net/10161/4921
Citation
From "MEC 99," Proceedings of the 1999 MyoElectric Controls/Powered Prosthetics Symposium Fredericton, New Brunswick, Canada: August, 1999. Copyright University of New Brunswick.
Collections
More Info
Show full item record