The Development Of An Advanced Multi-Axis Myo-Prosthesis And Controller 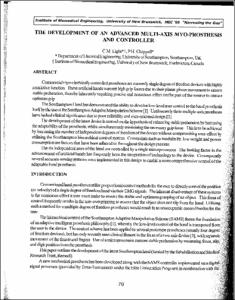 View / Download
533.2 Kb
Date
Authors
Light, C. M.
Chappell, P. H.
Repository Usage Stats
319
views
286
downloads
Abstract
Commercial myo-electrically controlled prostheses are currently single degree of fieedom devices with highly restrictive function. These artificial hands warrant high grip forces due to their planar pincer movement to ensure stable prehension, thereby inherently requiring precise and conscious effort on the part of the wearer to ensure optimum grip. The Southampton Hand has demonstrated the ability to devolve low-level user control to the hand prosthesis itself by the use of the Southampton Adaptive Manipulation Scheme. Until recently these multiple-axis prostheses have lacked clinical significance due to poor reliability and user-oriented design. The development of the latest device is centred on the hypothesis of enhancing stable piehension by increasing the adaptability of the prosthesis, whilst simultaneously minimising the necessary grip force. This is to be achieved by increasing the number of independent degrees of freedom of the device without compromising user-effort by utilising the Southampton hierarchical control system. Constraints such as modularity, low weight and power consumption are factors that have been adhered to throughout the design process. The six independent axes of the hand are controlled by a single microprocessor. The limiting factor in the advancement of artificial hands has frequently been the integration of technology to the device. Consequently several accurate sensing systems were implemented in this design to enable a more comprehensive control of the adaptable hand prosthesis.
Permalink
https://hdl.handle.net/10161/4926
Citation
From "MEC 99," Proceedings of the 1999 MyoElectric Controls/Powered Prosthetics Symposium Fredericton, New Brunswick, Canada: August, 1999. Copyright University of New Brunswick.
Collections
More Info
Show full item record