The use of the Hilbert transforra in EMG Analysis 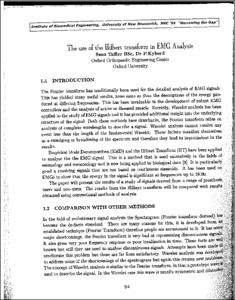 View / Download
417.5 Kb
Date
Authors
Taffler, Sean
Kyberd, Peter J.
Repository Usage Stats
843
views
523
downloads
Abstract
The Fourier transform has traditionally been used for the detailed analysis of EMG signals. This has yielded many useful results, none more so than the descriptions of the energy produced at differing frequencies. This has been invaluable in the development of robust EMG controllers and the analysis of active or diseased muscle. Recently, Wavelet analysis has been applied to the study of EMG signals and it has provided additional insight into the underlying structure of the signal. Both these methods have drawbacks, the Fourier transform relies on analysis of complete wavelengths to describe a signal Wavelet analysis cannot resolve any event less than the length of the fundamental Wavelet. These factors manifest themselves as a smudging or broadening of the spectrum and therefore they lead to inprecissions in the results. Empirical Mode Decomposition (EMD) and the Hilbert Transform (HT) have been applied to analyse the the EMG signal. This is a method that is used extensively in the fields of seismology and meteorology and is now being applied to biological data. It is particularly good a resolving signals that are not based on continuous sinusoids. It has been used on EMGs to show that the energy in the signal is significant at frequencies up to 2KHz. The paper will present the results of a study of signals derived from a range of prosthesis users and non-users. The results from the Hilbert transform will be compared with results obtained using conventional methods of analysis.
Permalink
https://hdl.handle.net/10161/4930
Citation
From "MEC 99," Proceedings of the 1999 MyoElectric Controls/Powered Prosthetics Symposium Fredericton, New Brunswick, Canada: August, 1999. Copyright University of New Brunswick.
Collections
More Info
Show full item record