Potential vorticity dynamics of boundary currents in a quasigeostrophic ocean. 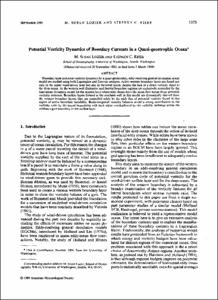 View / Download
1.5 Mb
Date
Authors
Lozier, M Susan
Riser, Stephen C
Repository Usage Stats
268
views
186
downloads
Abstract
Boundary layer potential vorticity dynamics for a quasi-geostrophic, eddy-resolving general circulation ocean model are studied using both Lagrangian and Eulerian analyses. Active western boundary layers are found not only in the upper wind-driven layer but also in the lower layers, despite the lack of a direct vorticity input to the deep ocean. At the western wall dissipative and inertial boundary regimes are exclusively controlled by the time-mean dynamics except for the deepest layer where eddy fluxes drive the mean flow across mean potential vorticity contours. Boundary layers formed at the southern wall in this model are dynamically distinct from the western boundary layers; they are controlled solely by the eddy flux of potential vorticity found in this region of active baroclinic instability. Basin-integrated vorticity balances reveal a strong contribution to the vorticity cycle by the lateral boundaries with such input overshadowed by the vorticity exchange across the midbasin gyre boundary in the surface layer.
Type
Journal article
Permalink
https://hdl.handle.net/10161/4940
Published Version (Please cite this version)
10.1175/1520-0485(1989)019<1373:PVDOBC>2.0.CO;2
Publication Info
Lozier, M Susan; & Riser, Stephen C (1989). Potential vorticity dynamics of boundary currents in a quasigeostrophic ocean. 10.1175/1520-0485(1989)019<1373:PVDOBC>2.0.CO;2. Retrieved from https://hdl.handle.net/10161/4940.
This is constructed from limited available data and may be imprecise. To cite this article, please review & use the official citation provided by the journal.
Collections
More Info
Show full item record Ronie-Richele Garcia-Johnson Emerita Professor of Earth and Ocean Sciences
Susan Lozier is a physical oceanographer with interests in large-scale ocean circulation. Upon completion of her PhD at the University of Washington, she was a postdoctoral scholar at Woods Hole Oceanographic Institution. She has been a member of the Duke faculty since 1992. Professor Lozier was the recipient of an NSF Early Career Award in 1996, was awarded a Bass Chair for Excellence in Research and Teaching in 2000, received a Duke University Award for Excellence in Mentoring in 2007, was nam