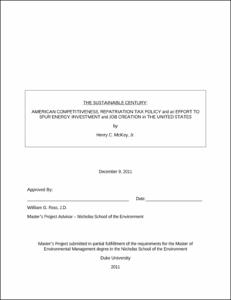 View / Download
931.3 Kb
Date
Author
McKoy, Henry
Advisor
Ross, Bill
Repository Usage Stats
326
views
713
downloads
Abstract
In the months leading up to the November 2008 election the adoption of major energy legislation in the U.S. seemed a foregone conclusion. Both major candidates for President campaigned on a platform including Cap and Trade Legislation as a key solution to the major challenge of both Global Warming and Jobs. Coalitions from the private sector that included utilities, manufacturers and a broad array of others came together to try and influence what the pending legislation would entail, but also took it to be a foregone conclusion. However, three years after a historic election that promised to usher in a new energy economy built on innovative legislation, the pendulum of change seems to have swung in a different direction. Following the mid-term elections of 2010 that saw a political upheaval, there are greater questions than ever as to what US energy legislation in the future will look like. The general public seems to have lost its interest in major energy legislation that is sometimes deemed as “job killers” by skeptics, as Americans struggle with unemployment, foreclosures, and financial difficulties unprecedented since the Great Depression. In the meantime, U.S. based corporations are experiencing unprecedented profit growth overseas and in 2011 have more than $1.2 trillion in cash and short-term investments on their foreign balance sheets. Everyone agrees having trillions of dollars abroad, sitting idle is not good for anyone; however, few can agree on the best route for bringing those dollars back to the U.S. American corporations argue that the current repatriation tax rate of 35% is too high and insist that a tax holiday similar to the one given in 2004, which allowed them to return capital at just over 5%, is more appropriate. The federal government and many objective studies have argued that the 2004 tax holiday was a disastrous failure, and though $312 billion was repatriated as a means to create jobs, that few jobs actually followed. This Master’s Project seeks to offer a well-thought-out policy proposal that would allow American corporations and the U.S. Government to meet halfway and achieve an agreement on repatriation for energy investment.
Type
Master's project
Department
Nicholas School of the Environment and Earth Sciences
Subject
Repatriation Tax American Competitiveness Energy Jobs
Permalink
https://hdl.handle.net/10161/4943
Citation
McKoy, Henry (2011). The Sustainable Century. Master's project, Duke University. Retrieved from https://hdl.handle.net/10161/4943.
Collections
More Info
Show full item record