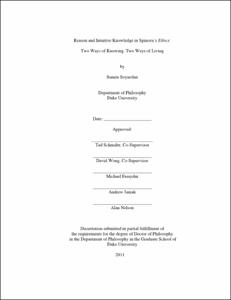 While both intuitive knowledge (<italic>scientia intuitiva</italic>) and reason (<italic>ratio</italic>) are adequate ways of knowing for Spinoza, they are not equal. "The greatest virtue of the mind" and "the greatest human perfection" consist in understanding things by intuitive knowledge, which Spinoza regards as superior to reason. Understanding why on Spinoza's account intuition is superior to reason is crucial for understanding his epistemological and ethical theories. Yet, the nature of this superiority has been the subject of some controversy due to Spinoza's parsimonious treatment of the distinction between reason and intuitive knowledge in the Ethics. In my dissertation, I explore this fundamental but relatively unexplored issue in Spinoza scholarship by investigating the nature of this distinction and its ethical implications. I suggest that these two kinds of adequate knowledge differ not only in terms of their method, but also with respect to their representative content. More specifically, I hold that unlike reason, which is a universal knowledge, intuitive knowledge descends to a level of particularity, including an adequate knowledge of one's own essence as it follows directly from God, which represents a superior form of self-knowledge. Attaining this superior self-knowledge makes intuitive knowledge the culmination of not only understanding but also happiness. Since, for Spinoza, there is an intrinsic relationship between the pursuit of knowledge and how we live our lives, I argue that these two ways of knowing are at the same time two ways of living.