States of Allelic Imbalance on the X Chromosomes in Human Females 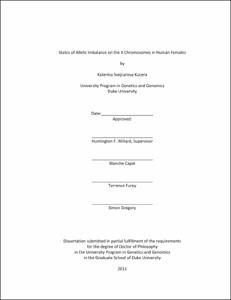 Allelic imbalance, in which two alleles at a given locus exhibit differences in gene expression, chromatin composition and/or protein binding, is a widespread phenomenon in the human and other complex genomes. Most examples concern individual loci located more or less randomly around the genome and thus imply local and gene-specific mechanisms. However, genomic or chromosomal basis for allelic imbalance is supported by multi-locus examples such as those exemplified by domains of imprinted genes, spanning ~1-2 Mb, or by X chromosome inactivation, involving much of an entire chromosome. Recent studies have shown that genes on the two female X chromosomes exhibit a breadth of expression patterns ranging from complete silencing of one allele to fully balanced biallelic expression. Although evidence for heritability of allele-specific chromatin and expression patterns exists at individual loci, it is unknown whether heritability is also reflected in the chromosome-wide patterns of X inactivation.

The aim of this thesis is to elucidate the extent to which the widespread variable patterns of allelic imbalance on the human X chromosome in females are under genetic control and how access of the transcription machinery to the human inactive X chromosome in females is determined at a genomic level. For the set of variable genes examined in this study, the absence or presence of expression appears to be stochastic with respect to the population rather than abiding by strict genetic rules. Furthermore, variable gene expression that I have detected even among multiple clonal cell lines derived from a single individual suggests fluctuation in transcriptional machinery engagement. I find that, although expression at most genes on the human inactive X chromosome is repressed as a result of X inactivation, a number of loci are accessible to the transcriptional machinery. It appears that RNA Polymerase II is present at alleles on the inactive X even at the promoters of several silenced genes, indicating a potential for expression.

This thesis embodies a transition in the field of human X chromosome inactivation from gene by gene approaches used in the past to utilizing high-throughput technologies and applying follow-up analytic techniques to draw upon the vast data publicly available from large consortia projects.