Shifting Loyalties: World War I and the Conflicted Politics of Patriotism in the British Caribbean 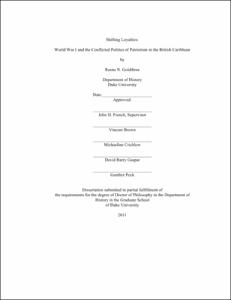 This dissertation examines how the crisis of World War I impacted imperial policy and popular claims-making in the British Caribbean. Between 1915 and 1918, tens of thousands of men from the British Caribbean volunteered to fight in World War I and nearly 16,000 men, hailing from every British colony in the region, served in the newly formed British West Indies Regiment (BWIR). Rousing appeals to imperial patriotism and manly duty during the wartime recruitment campaigns and postwar commemoration movement linked the British Empire, civilization, and Christianity while simultaneously promoting new roles for women vis-à-vis the colonial state. In Jamaica and Trinidad and Tobago, the two colonies that contributed over seventy-five percent of the British Caribbean troops, discussions about the meaning of the war for black, coloured, white, East Indian, and Chinese residents sparked heated debates about the relationship among race, gender, and imperial loyalty.

To explore these debates, this dissertation foregrounds the social, cultural, and political practices of BWIR soldiers, tracing their engagements with colonial authorities, military officials, and West Indian civilians throughout the war years. It begins by reassessing the origins of the BWIR, and then analyzes the regional campaign to recruit West Indian men for military service. Travelling with newly enlisted volunteers across the Atlantic, this study then chronicles soldiers' multi-sited campaign for equal status, pay, and standing in the British imperial armed forces. It closes by offering new perspectives on the dramatic postwar protests by BWIR soldiers in Italy in 1918 and British Honduras and Trinidad in 1919, and reflects on the trajectory of veterans' activism in the postwar era.

This study argues that the racism and discrimination soldiers experienced overseas fueled heightened claims-making in the postwar era. In the aftermath of the war, veterans mobilized collectively to garner financial support and social recognition from colonial officials. Rather than withdrawing their allegiance from the empire, ex-servicemen and civilians invoked notions of mutual obligation to argue that British officials owed a debt to West Indians for their wartime sacrifices. This study reveals the continued salience of imperial patriotism, even as veterans and their civilian allies invoked nested local, regional, and diasporic loyalties as well. In doing so, it contributes to the literature on the origins of patriotism in the colonial Caribbean, while providing a historical case study for contemporary debates about "hegemonic dissolution" and popular mobilization in the region.

This dissertation draws upon a wide range of written and visual sources, including archival materials, war recruitment posters, newspapers, oral histories, photographs, and memoirs. In addition to Colonial Office records and military files, it incorporates previously untapped letters and petitions from the Jamaica Archives, National Archives of Trinidad and Tobago, Barbados Department of Archives, and US National Archives.