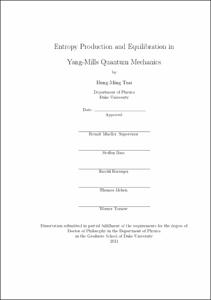 View / Download
2.3 Mb
Date
Author
Tsai, Hung-Ming
Advisors
Mueller, Berndt
Bass, Steffen
Baranger, Harold
Mehen, Tom
Tornow, Werner
Repository Usage Stats
376
views
499
downloads
Abstract
Entropy production in relativistic heavy-ion collisions is an important physical quantity for studying the equilibration and thermalization of hot matters of quantumchromodynamics (QCD). To formulate a nontrivial definition of entropy for an isolated quantum system, a certain kind of coarse graining may be applied so that the entropy for this isolated quantum system depends on time explicitly. The Husimi distribution, which is a coarse grained distribution in the phase space, is a suitable candidate for this approach. We proposed a general and systematic method of solving the equation of motion of the Husimi distribution for an isolated quantum system. The Husimi distribution is positive (semi-)definite all over the phase space. In this method, we assume the Husimi distribution is composed of a large number of Gaussian test functions. The equation of motion of the Husimi distribution, formulated as a partial differential equation, can be transformed into a system of ordinary differential equations for the centers and the widths of these Gaussian test functions. We numerically solve the system of ordinary differential equations for the centers and the widths of these test functions to obtain the Husimi distribution asa function of time. To ensure the numerical solutions of the trajectories of the test particles preserve physical conservation laws, we obtain a constant of motion for the quantum system. We constructed a coarse grained Hamiltonian whose expectation value is exactly conserved. The conservation of the coarse grained energy confirms the validity of this method. Moreover, we calculated the time evolution of the coarse grained entropy for a model system (Yang-Mills quantum mechanics). Yang-Mills quantum mechanics is a quantum system whose classical correspondence possesses chaotic behaviors. The numerical results revealed that the coarse grained entropy for Yang-Mills quantum mechanics saturates to a value that coincides with the micro-canonical entropy corresponding to the energy of the system. Our results confirmed the validity of the framework of first-principle evaluation of the coarse grained entropy growth rate. We show that, in the energy regime under study, the relaxation time for the entropy production in Yang-Mills quantum mechanics is approximately the same as the characteristic time of the system, indicating fast equilibration of the system. Fast equilibration of Yang-Mills quantum mechanics is consistent to current understanding of fast equilibration of hot QCD matter in relativistic heavy-ion collisions.
Type
Dissertation
Department
Physics
Permalink
https://hdl.handle.net/10161/4970
Citation
Tsai, Hung-Ming (2011). Entropy production and equilibration in Yang-Mills quantum mechanics. Dissertation, Duke University. Retrieved from https://hdl.handle.net/10161/4970.
Collections
More Info
Show full item record