Geometric Hitting Sets and Their Variants 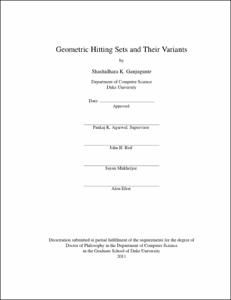 This thesis explores a few geometric optimization problems that arise

in robotics and sensor networks. In particular we present efficient

Given a set of objects and a collection of subsets of the objects,

called ranges, the hitting-set problem asks for a minimum number of

objects that intersect all the subsets in the collection.

In geometric settings, objects are

regions (e.g., disks or polygons), i.e., the subset of points lying in each

of ranges are implicitly defined. Namely, we are given a convex

polygonal robot and a set of convex polygonal obstacles, and we wish

Next, motivated by the application of sensor placement in sensor networks,

we study the so-called ``art-gallery'' problem. Given a polygonal

environment, we wish to place the minimum number of guards so that

the every point in the environment is visible from at least one guard.

This problem can be formulated as a hitting-set problem. We present

a sampling based algorithm for this problem and study various extensions

Next, we study the geometric hitting-set problem in a dynamic setting,

to maintain a hitting set. We present algorithms

Finally, we consider the budgeted hitting-set problem, in which we

ranges as possible. Motivated by applications in network vulnerability

analysis we study this problem in a probabilistic setting.