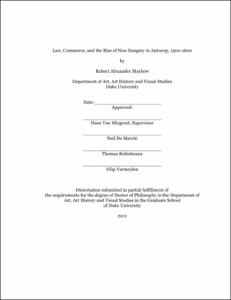 Marinus Van Reymerswaele's painting of 1542, <italic>The Lawyer's Office</italic>, was a completely new type of image in the history of art. It shows a lawyer and his assistant behind a desk strewn with briefs, wax seals and money. A complex set of historical circumstances at the interface of art, economics, and legal history in sixteenth century Antwerp explain this painting's appearance and significance. In the beginning of the sixteenth century, Antwerp became a locus of unprecedented artistic production caused by the dramatic growth of its mercantile population, its highly organized commercial infrastructure, and its competitive business atmosphere. These developments stimulated a new sophistication in the art market and an energetic approach to acquiring and collecting, supported by publicly-funded venues to mass-market paintings. Over the course of the sixteenth century, artists invented new subjects to meet public demand. Many of these were radically new. One of these artists, Marinus Van Reymerswaele (c. 1490-1546) made distinctive paintings of lawyers, bankers, and moneychangers which relate to fundamental changes in the legal and commercial infrastructure in the sixteenth century. In just one generation, the Habsburg authority centralized the political and legal landscape in the Netherlands. As the prized economic and cultural center of Habsburg territories, Antwerp was transformed.

This dissertation links the development of consumption practices and the rise of new pictorial subjects introduced in Antwerp with the changing business and legal climate of the city during the sixteenth century. Through an investigation of unpublished home inventories recorded between 1528 and 1588, it clarifies the acquisition preferences of the Antwerp public at large, considering both changing preferences for panel and linen paintings as well as for novel and traditional images alike. This reassessment of painting consumption reveals a starkly more conservative approach to buying images than previously assumed, underscoring the rarity of everyday life subjects in Antwerp domestic spaces. As a painter operating within this market, Marinus van Reymerswaele invented a new brand of painting -- the new old master painting -- that not only addressed broad social concerns sparked by Habsburg political, mercantile, and legal reforms, but also built on long-established Netherlandish visual traditions. As the sixteenth century drew to a close, his paintings became more desired by collectors but lost their topicality as memories of Antwerp's political anxieties faded into the past.