The Effect of Select Biological and Environmental Factors on the Horizontal Gene Transfer and Functionality of the TOL Plasmid: A Case Study for Genetic Bioaugmentation 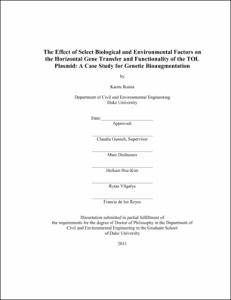 Bioremediation has gained considerable attention over the past few decades as an effective and relatively inexpensive method of cleaning up contaminated environmental sites. Specific methods for bioremediation could involve ex situ pump-and-treat processes or in situ treatments that add either nutrients and substrates to stimulate microbial degradation of contaminants (biostimulation) or microbes that have high degradation potentials (bioaugmentation). Although in situ bioremediation processes generally offer more advantages than ex situ methods, there are concerns with the current in situ methods that limit their effectiveness. For example, a major concern in bioaugmentation is the effect of the addition of large quantities of microorganisms that are foreign to the site. This may lead to significant changes in microbial community structure and a long-term instability in ecosystem integrity. Furthermore, the degradative activities of such foreign microbes may be compromised when introduced into an unfamiliar environment during bioaugmentation, thereby resulting in a lower bioremediation potential.

Horizontal gene transfer (HGT) is a widespread phenomenon in the prokaryotic kingdom that occurs readily under harsh environments where genetic adaptation is required for the survival of microorganisms. HGT could be useful for bioremediation to shift microbial communities in favor of degrading xenobiotics, persistent organic compounds, and emerging contaminants. In fact, it has been noted that HGT has repeatedly occurred naturally in contaminated sites to aid in bacterial adaptation to organic pollutants. Therefore, instead of introducing large quantities of foreign microbes capable of degrading the contaminant as seen in conventional bioaugmentation, we can introduce small amounts of bacteria harboring genes encoding for enzymes that degrade the contaminant of interest and stimulate in situ HGT of those degradative mobile genetic elements to the native bacterial community. This proposed method is termed genetic bioaugmentation and may provide a safer way of bioaugmentation than using genetically engineered microbes. However, the mechanisms and effects of HGT must be extensively characterized prior to this application with a focus on how to enhance HGT occurrences and improve the resulting degradation potential. This method should be especially useful for the bioremediation of emerging anthropogenic contaminants.

In this study, the TOL plasmid, which includes genes for the degradation of xylenes, toluene, and related species, is used as a model system with toluene as the model contaminant. While toluene is not considered a persistent emerging organic contaminant, the TOL plasmid is an ideal model HGT system because it falls under a diverse family of degradative plasmids that frequently undergo HGT and its degradation pathways are well documented. Using a green fluorescent protein expression system, we have demonstrated that the TOL plasmid from Pseudomonas putida BBC443 has been successfully transferred to several &#947;-proteobacteria strains, e.g. Pseudomonas fluorescens, Serratia marcescens, and Escherichia coli DH5&#61537;. However, some transconjugants that harbor the TOL plasmid do not have the ability to degrade and utilize toluene as the sole carbon source even though all of the necessary genes have been successfully transferred. Further investigations have shown that such transconjugants require additional external factors for toluene degradation such as alternative carbon sources. For example, the effects of glucose addition on the toluene degradation rates of the various strains are shown in Figure 1. The addition of glucose at most concentrations resulted in significant enhancement of the toluene degradation rates in all transconjugants while its effect on the donor strain, P. putida, was not as pronounced. Similar results were obtained when varying dilutions of the nutrient-rich Luria-Bertani medium was added. Furthermore, exposure of transconjugants to different pH values and nitrogen sources indicated that pH 8 and ammonia were the most favorable conditions for gene functionality. The mechanisms of enhancement by such changes in environmental conditions are currently being studied.

While other parameters should be studied in depth prior to the field application of genetic bioaugmentation, the results from this study indicate that successful HGT events coupled with the desired degradative phenotype can be promoted by small changes in environmental conditions. With further research, there is potential for genetic bioaugmentation to be applied towards remediating emerging contaminants in various environments such as groundwater and soil. Overall, this study will illustrate that genetic bioaugmentation may provide an effective but safer, cheaper and less invasive method for bioremediation.