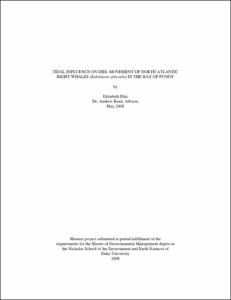 View / Download
1.3 Mb
Date
Author
Pike, Elizabeth
Advisor
Read, Andrew J
Repository Usage Stats
319
views
4,450
downloads
Abstract
The endangered North Atlantic right whale (Eubalaena glacialis), is known to aggregate in the Bay of Fundy, between New Brunswick and Nova Scotia, Canada to feed during summer. The Bay of Fundy is famous for its extreme tidal range of up to 15 meters, but the effect of these tides on the distribution of whales has not been thoroughly investigated. I hypothesized that the distribution of movements of the whales is influenced by tidal currents, which can average from two to three knots at mid–tide. To test this hypothesis, I queried the North Atlantic Right Whale Catalog of photographically identified individuals and compiled sighting records of animals seen more than once a day in the Bay of Fundy. Paired sightings for each animal were analyzed for time, distance and tidal stage changes between each set of sightings. These results were compared to the hypothetical movement of a passive particle using Canada’s Department of Fisheries and Ocean WebDrogue model. My results indicate that right whales are displaced by the tides. The likelihood that they have remained with a discrete prey patch was correlated with the overall displacement of the whale and the amount of time elapsed. There was a significant correlation between the tidal current direction and the short–term movements of right whales in this habitat area. Understanding how right whales utilize this important habitat area will help inform more effective management decisions.
Type
Master's project
Department
Nicholas School of the Environment and Earth Sciences
Subject
Right whale
Bay of Fundy
Photo-ID
Tidal current
Conservation area
Permalink
https://hdl.handle.net/10161/498
Citation
Pike, Elizabeth (2008). Tidal influence on diel movement of North Atlantic right whales (Eubalaena glacialis) in the Bay of Fundy. Master's project, Duke University. Retrieved from https://hdl.handle.net/10161/498.
Collections
More Info
Show full item record