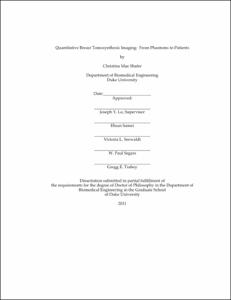 Breast cancer is currently the most common non-skin cancer and the second leading cause of cancer-related death in women here in the United States. X-ray mammography is currently the standard clinical imaging modality for breast cancer screening and diagnosis due to its high sensitivity and resolution at a low patient dose. With the advancement of breast imaging from analog to digital, quantitative measurements rather than qualitative assessments can be made from these images. One such measurement, mammographic breast density (i.e. the percentage of the entire breast volume that is taken up by dense glandular tissue), has been shown to be a biomarker well correlated with cancer risk. However, a digital mammogram still suffers from its projective nature. The resulting overlap of normal breast tissue can obscure lesions, limit quantitative measurement accuracy, and present false alarms leading to unnecessary recall studies. To address this key limitation, several 3D imaging techniques have been developed such as breast magnetic resonance imaging (MRI), dedicated breast computed tomography (CT), and digital breast tomosynthesis (tomo). Perhaps the most recently developed modality is tomo, which is a limited-angle cone-beam CT of the breast compressed in the same geometry as mammography. Because tomo retains all the aforementioned advantages of mammography but adds depth information and can be built based on an existing digital mammography device, measuring breast density and extracting other quantitative features from tomo images was a major focus of this study.

Before attempting to measure breast density and other features from reconstructed tomo image volumes, the quantitative potential of this imaging modality was assessed. First, we explored a slice-by-slice technique that measures tissue density using only the information from a single slice from the reconstructed tomosynthesis volume with geometrically simple tissue-equivalent phantoms. Once this task has been satisfactorily performed, we studied a probabilistic approach toward quantitation of the entire 3D volume. Some work has been done previously in the realm of 2D hidden Markov random fields (HMRFs) to categorize mammograms according to their Wolf pattern, detect mammographic lesions, and segment satellite and mixed media (text/photograph) images. For this project, a 3D hidden Markov model (HMM) method was developed and applied to tomo images under the simplified assumption that the possible tissue type of each tomo voxel is either adipose (fatty) or glandular (dense). Because adipose and glandular tissue is easily distinguished in MR images, patient breast MRIs were used to train, validate, and finally to assess the accuracy of our HMM segmentation algorithm when applied to tomo images by comparing the volumetric breast density to the MRI breast density for the same patient. Because they are so often studied conjunctively, several image texture features were calculated and compared between MRI and tomo as well.

Another aim of our study was to investigate whether changes in macroscopic 3D imaging features (texture and density) can accurately predict the chemoprevention response that was measured with Random Periareolar Fine Needle Aspiration (RPFNA) cytology for a uniquely young high-risk cohort of women. This aim to investigate the potential of combining multi-modality macroscopic 3D imaging information with a cytological measure of risk and then investigating how response to tamoxifen and other chemoprevention treatment affects each of these risk biomarkers in young, high-risk women is completely novel in the fields of medical physics and biomedical engineering.