Studies of the Human Head from Neonate to Adult: An Inertial, Geometrical and Structural Analysis with Comparisons to the ATD Head 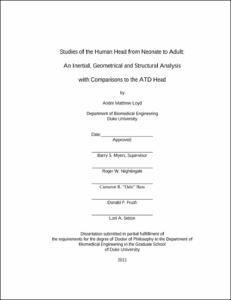 Child head injury is a very costly problem, both in terms of morbidity/mortality and direct medical costs. In fact, it is the leading cause of death and disability for those in the United States under age 18-years-old. Currently, head injury in children ages newborn to 19-years-old is responsible for 7500 deaths per year--30% of all childhood deaths in the United States. Given its importance and effect on the population, the study of pediatric head injury is greatly hindered by the lack of available pediatric post mortem human specimen (PMHS) data. As a substitute for PMHS testing, anthropometric test devices (ATDs) and finite element models (FEMs) have been developed to model the head. However, there is a dearth of data for the design and validation of these models.

The goal of this study was to use pediatric PMHSs to both advance the study of pediatric head injury and to provide validation data for ATD and finite element head models. 14 pediatric heads, 8 adult heads, and 6 ATD heads were studied to obtain geometrical, inertial, structural stiffness, and impact properties. The computational tomography (CT) method was used on pediatric heads to get inertial properties, and clinical CT scans were used to develop average head and skull contours for 12 different age groups. To obtain impact properties, the heads were dropped onto a rigid plate from 15cm and 30cm, and the acceleration-time pulses were analyzed to obtain acceleration HIC and other impact properties. The heads were then placed between two aluminum plates and compressed at four different rates to obtain structural stiffness values. Using the PMHS results, the ATD heads were compared against age-matched human heads, and the scaling rules used for ATD production were tested for accuracy.

The study found that between the ages of 5-months-old and 22-months-old, the human head was susceptible to fracture from drops as low as 15cm. The structural stiffness of the human head was shown to increase by three orders of magnitude from neonate to adult. For the impact properties, the human head's peak acceleration and head injury criteria increased with age, while the human head's pulse duration and coefficient of restitution decreased with age. The 50th percentile Hybrid III head was found to adequately model the response of the adult head for multiple head impact locations, while the 3-year-old Q3 child ATD was found to be too stiff during impact. Overall, this study provides novel data that can be directly applied to pediatric head injury curves, and pediatric ATD and finite element head models.