Insights into the Synthesis, Mechanism of Action, and Biosynthesis of a Novel Lipodepsipeptide Antibiotic, WAP-8294A2 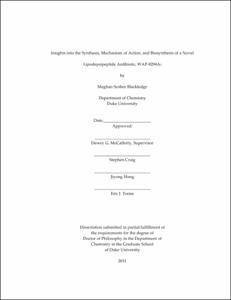 In the last two decades, bacterial infections have reemerged as a serious public health threat. In the United States, nosocomial infections alone cost several billion dollars and are responsible for 100,000 deaths annually.3 Of particular concern is the emergence of bacteria with single and multidrug resistance. Infection by such bacteria can be difficult, if not impossible, to treat and cure. In recent years, methicillin-resistant Staphylococcus aureus (MRSA) has emerged as one of the most threatening resistant strains. MRSA infections are now responsible for more deaths each year than AIDS in the United States.4 Due to the multidrug resistance of these "superbugs", new antibiotics with novel mechanisms of action are urgently needed.5

Unfortunately, although novel antibiotics are needed to stem the resistance crisis, the pipeline for novel antibiotics has narrowed considerably in recent decades.3,6,7 In the last thirty years, only the oxazolidinones and cyclic lipopeptides have been developed as novel antibiotic classes.7 One novel cyclic lipodepsipeptide antibiotic in the clinical pipeline is WAP-8294A2. WAP-8294A2 (Figure 1.0.4) was isolated from the soil bacteria Lysobacter staphylocidin (FERM BP-4900) in Japan in 1997. It is the major component of a mixture of eighteen related compounds, all of which showed antibiotic activity.13 WAP-8294A2 showed strong in vitro antibiotic activity against Gram-positive bacteria including vancomycin-resistant Enterococci (VRE) and methicillin-resistant Staphylococcus aureus (MRSA) (Table 1.1).14,15 In vivo assays also showed that WAP-8294A2 has strong activity against known MRSA strains.13 We were interested in gaining synthetic access to WAP-8294A2 and analogs to establish a system for structure-activity relationship (SAR) studies. We also sought to further characterize the proposed mechanism of action and identify and characterize the biosynthetic machinery.

We developed a solid-phase strategy for the development of WAP-8294A2 and analogs with on-resin cyclization based on molecular modeling studies. We chose a macrocyclization site between Glu8 and Asn9 to take advantage of a predicted turn element and used the carboxylate side chain of glutamic acid as a convenient handle for resin attachment. We describe three analogs that were synthesized and analyzed for their biological and mechanistic profiles, providing evidence that the N-acyl fatty acid tail and the depsipeptide ester bond are required for antibiotic activity, but not for binding to the membrane phospholipid cardiolipin.

Additionally, we developed a method to improve the production, isolation, and purification of the WAP-8294A antibiotic complex highly enriched in the A2 fraction. The antibiotic complex was analyzed for antibiotic activity and was found to be equally active to the reported values for the A2 fraction. Basic mechanism of action studies with cardiolipin confirmed the ability of the WAP-8294A mixture to bind to cardiolipin and also suggested that the binding is mediated through interactions with the phosphate groups in the polar headgroup of cardiolipin.

Finally, we sequenced the genome of L. staphylocidin and inspected it for the WAP-8294A biosynthetic machinery. We successfully identified the WAP-8294A NRPS biosynthetic gene cluster in L. staphylocidin. It is composed of two large open reading frames (ORFs) that encode NRPS machinery made up of 44 domains organized into 12 modules. The organization of the gene cluster argues for a co-linear assembly of the peptide template. We also identified the genes flanking the large NRPS ORFs, which encode for a redox enzyme and several host regulation and preservation proteins.

In the course of examining the L. staphylocidin genome for the WAP-8294A biosynthetic gene cluster, we discovered a single module hybrid PKS/NRPS with high homology to heat-stable antifungal factor (HSAF). HSAF has been identified in two strains of L. enzymogenes, but was previously unknown in L. staphylocidin. We identified the genes in this cluster and compared them to the previously known HSAF biosynthetic gene clusters noting important similarities and differences between them.