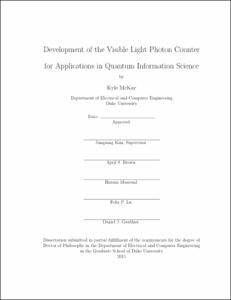 The visible light photon counter (VLPC) is a high quantum efficiency (QE), Si-based, single-photon detector with high gain, low-noise multiplication, low timing jitter, and photon number resolution. While the VLPC has high QE in the visible wavelengths, the QE in the ultraviolet and infrared is low due to minimal absorption within the active layers of the device. In the ultraviolet, the absorption coefficient of Si is high and most of the incident photons are absorbed within the top contact of the device, whereas, in the infrared, Si is practically transparent. A number of applications in quantum information science would benefit from use of the VLPC if the QE was improved in the ultraviolet (e.g., state detection of trapped ions) and the infrared (e.g., long-distance quantum cryptography). This thesis describes the development of the ultraviolet photon counter (UVPC) and the infrared photon counter (IRPC), which are modified versions of the VLPC with increased QE in the ultraviolet and infrared wavelengths, respectively. The UVPC has a transparent metal Schottky contact to reduce absorption within the top contact of the VLPC, resulting in an increase in the QE in the ultraviolet by several orders of magnitude. The IRPC is a proposed device that has an InGaAs absorption layer that is wafer-fusion bonded to the VLPC. The band alignment of the resulting InGaAs/Si heterojunction is measured and shows a large discontinuity in the valence band that impedes carrier transport at the interface. A ultra-high vacuum wafer-bonding system was developed to understand the impact of the surface chemistry of the bonded wafers on the band alignment of the InGaAs/Si heterojunction of the IRPC.