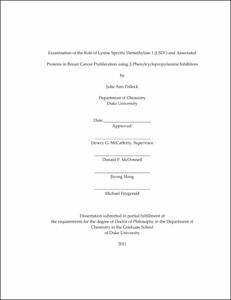 Lysine specific demethylase 1 (LSD1) is a FAD-dependent amine oxidase enzyme responsible for removing methyl groups from the side chain nitrogen of lysine within histones in order to regulate gene transcription. By its interaction with various transcriptional complexes, including those containing estrogen receptor &alpha; (ER&alpha;), LSD1 mediates expression of many genes important in cancer proliferation and progression. Herein, we report our efforts towards understanding the function of LSD1 in breast cancer. We have developed a straightforward method for the syntheses of 2-arylcyclopropylamines as irreversible mechanism-based inactivators of LSD1. We employed these small molecules as probes of LSD1 activity, and together with experiments involving the knockout of LSD1 by small interfering RNA (siRNA), we have shown that LSD1 activity is essential for both ER&alpha;-postive and ER&alpha;-negative breast cancer proliferation. LSD1 inhibitors induce a dramatic cell cycle arrest without causing apoptosis.

Furthermore, we observe that LSD1 and ER&alpha; work cooperatively to express certain estrogen-target genes through simultaneous recruitment to promoters; LSD1 inhibition diminishes ER&alpha; recruitment. Similarly, knockdown of CoREST, a binding partner of LSD1, results in comparable changes in gene expression. Although, we have not observed a direct interaction between LSD1 and ER&alpha;, we believe that CoREST may be facilitating this interaction. We have made efforts to inhibit the interaction between LSD1 and CoREST <italic>in vitro</italic> in hopes of targeting this interface in breast cancer cells in order to disrupt the necessary functional complex and prevent LSD1 activity.