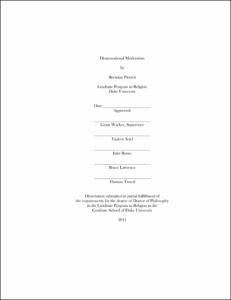 This dissertation begins with questions about the epistemic methods that late-nineteenth and early-twentieth-century American Protestants used to create confidence in new religious ideas, and particularly the role of scientific rhetoric in this confidence making. It concentrates on early Protestant fundamentalists and the emergence of dispensationalism modernism. Distinct from dispensational premillennialism--a set of theological ideas about prophecy belief and the end times--dispensational modernism was a constellation of epistemic ideas and methods used to interpret texts and time.

Historians have traditionally portrayed fundamentalists and dispensationalists as anti-modern, reactionary foes of modern scientific reasoning. Yet early dispensational thinkers created new, modernist methods for readings texts (particularly the Bible) and structuring time (through elaborate interpretations of prophecy). These ideas emerged amidst popular beliefs about the power of quantification, classification, and scientific analysis to construct firm religious knowledge. While liberal higher critics adopted practices of interpreting texts in light of the times--particularly historicism--dispensationalists took a contrary approach and interpreted the times in light of the text of the Bible. Seeing time as divinely ordered and classified with distinct divisions, dispensationalists argued that the meaning of time came from without, through supernatural ruptures in the temporal order.

Dispensationalism thrived in the interdenominational networks of mainstream and conservative Protestant clergy who sought to retain intellectual authority for biblical interpretation. As knowledge production became increasingly specialized and professionalized--the domain of elites--dispensational methods provided clergy means to navigate the tension between the need for specialized expertise and popular appeal. These ideas took canonical form in the Scofield Reference Bible, first published in 1909 and still the best-selling reference Bible in American history. The reference notes in Scofield's Bible--condensed expert interpretations and taxonomic divisions--promised methodological proficiency and theological confidence to anyone who studied it.