A Tale of Two Proteins: Insights into the Haemophilus influenzae Hap and Hia Autotransporters 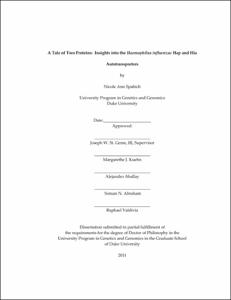 Nontypeable Haemophilus influenzae (NTHi) is a common commensal in the human nasopharynx that can cause localized respiratory tract diseases such as otitis media, bronchitis, and pneumonia. NTHi adheres to respiratory epithelial cells, a critical step in the process of colonization enabled by bacterial surface adhesive structures called adhesins. One group of NTHi adhesins are autotransporters, proteins that have an N-terminal signal sequence, a C-terminal &#946;-barrel domain, and an internal passenger domain with effector function. The goal of this work was to increase our understanding of two NTHi autotransporters, Hap and Hia.

Hap is a monomeric autotransporter that mediates adherence to epithelial cells and extracellular matrix (ECM) proteins. Hap also self-associates with protein on neighboring bacteria, resulting in bacterial aggregation and microcolony formation. The Hap passenger domain contains the regions responsible for adhesive activity. To define the molecular mechanism of Hap adhesive activity, we crystallized the Hap passenger domain. Characterization of the crystal structure revealed an N-terminal globular domain and a more ordered, prism-like C-terminal domain. Interestingly, Hap crystallized as a multimer, suggesting that Hap-Hap interactions occurred in the passenger domain. Progressive deletions of the &#946;-loops that comprise the C-terminal region disrupted Hap-Hap interactions and led to a defect in bacterial settling. To further support that the C-terminal domain was responsible for Hap-Hap interactions,

The ECM binding domain in located in the final 511 amino acids of the Hap passenger domain. To pin-point the region of the ECM protein fibronectin that is recognized by Hap, we spotted small fragments of fibronectin onto nitrocellulose membranes and incubated the membrane with purified Hap passenger domain. Far Western analysis using Hap antibody revealed that the smallest fibronectin region necessary for binding was comprised of the first two type III repeats, FNIII(1-2). To define the regions of Hap responsible for interaction with fibronectin, we mutated motifs in the Hap passenger domain that are important for fibronectin binding in other bacterial proteins. Based on assessment by ELISA, many of the mutations located between amino acids 525-725 caused reduced bacterial binding to fibronectin. However, no mutation totally ablated binding, suggesting that a larger Hap region is involved in fibronectin binding.

In an additional study, we identified a relationship between Hap levels in the outer membrane and the expression of lipopolysaccharide (LPS) biosynthesis enzymes. Through Western and qPCR analysis, we found that mutation of the rfaF, pgmB, lgtC, kfiC, orfE, rfbP, lsgB and lsgD genes involved in the synthesis of LPS oligosaccharide core in H. influenzae strain Rd/HapS243A resulted in loss of Hap in the bacterial outer membrane and a decrease in hap transcript. In contrast, the same mutations had no effect on outer membrane localization of H. influenzae P5 and IgA1 protease or levels of the p5 or iga1 transcripts, suggesting a Hap-specific effect. Elimination of the HtrA periplasmic protease resulted in a return of Hap to the outer membrane and restoration of wild type levels of hap transcript. We speculate that the lack of certain LPS biosynthesis enzymes causes Hap to mislocalize and accumulate in the periplasm, where it is degraded by HtrA. This degradation then leads to a decrease in hap transcript. lgtC is one of several phase variable LPS biosynthesis genes. Using an antibody against the epitope formed in part by the lgtC gene product, we identified lgtC phase-off bacteria by Western analysis of colony blots. Consistent with our previous observations, in lgtC phase off bacteria Hap was absent from the outer membrane and hap transcript was reduced. By analyzing a lgtC/lic2A double mutant, we found that Hap localization in the outer membrane and hap transcript levels were not related to LPS size but instead to the functions of the LPS synthesis enzymes themselves. This relationship could be beneficial to bacteria in vivo as a way to regulate Hap expression.

In summary, this work provides insights into the regulation and adhesive activity of Hap and the outer membrane localization of Hia. We have learned important details about these factors that shed light on aspects of H. influenzae disease and could lead to new antimicrobial therapies.