Testing the Rusted Chain: Cherokees, Carolinians, and the War for the American Southeast, 1756-1763 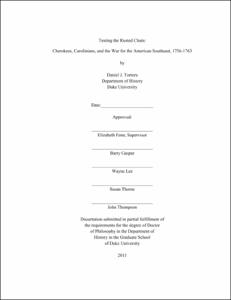 In 1760, when British victory was all but assured and hostilities in the northeastern colonies of North America came to an end, the future of the southeastern colonies was not nearly so clear. British authorities in the South still faced the possibility of a local French and Indian alliance and clashed with angry Cherokees who had complaints of their own. These tensions and events usually take a back seat to the climactic proceedings further north. I argue that in South Carolina, by destabilizing relations with African and Native Americans, the Cherokee Indians raised the social and political anxieties of coastal elites to a fever pitch during the Anglo-Cherokee War. Threatened by Indians from without and by slaves from within, and failing to find unbridled support in British policy, the planter-merchant class eventually sought to take matters into its own hands. Scholars have long understood the way the economic fallout of the French and Indian War caused Britain to press new financial levies on American colonists. But they have not understood the deeper consequences of the war on the local stage. Using extensive political and military correspondence, ethnography, and eighteenth-century newspapers, I offer a narrative-driven approach that adds geographic and ethnographic breadth and context to previous scholarship on mid-eighteenth century in North America. I expand understandings of Cherokee culture, British and colonial Indian policy, race slavery, and the southeastern frontier. At the same time, I also explain the origins of the American Revolution in the South.