Genomic Insights Into the Lichen Symbiosis: <italic>Cladonia grayi</italic> as a Model Lichen 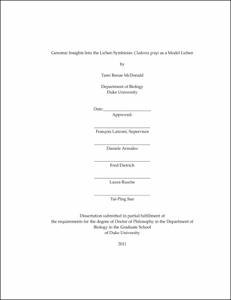 Lichens are symbioses between a fungus and a photosynthesizing partner such as a green alga or a cyanobacterium. Unlike mycorrhizal or rhizobial symbioses, the lichen symbiosis is not well understood either morphologically or molecularly. The lichen symbiosis has been somewhat neglected for several reasons. Lichens grow very slowly in nature (less than 1 cm a year), it is difficult to grow the fungus and the alga separately and, moreover, it remains difficult to resynthesize the mature symbiosis in the laboratory. It is not yet possible to delete genes, nor has any transformation method been established to introduce genes into the genomes of either the fungus or the alga. However, the lack of genetic tools for these organisms has been partially compensated for by the sequencing of the genomes of the lichenizing fungus <italic>Cladonia grayi</italic> and its green algal partner <italic>Asterochloris</italic> sp. This work uses the model lichen system <italic>Cladonia grayi</italic> and the associated genomes to explore one evolutionary and one developmental question concerning the lichen symbiosis.

Chapter One uses data from the genomes to assess whether there was evidence of horizontal gene transfer between the lichen symbionts in the evolution of this very intimate association; that is, whether genes of algal origin could be found in the fungal genome or vise versa. An initial homology search of the two genomes demonstrated that the fungus had, in addition to ammonium transporter/ammonia permease genes that were clearly fungal in origin, ammonium transporter/ammonia permease genes which appeared to be of plant origin. Using cultures of various lichenizing fungi, plant-like ammonium transporter/ammonia permease genes were identified by degenerate PCR in ten additional species of lichen in three classes of lichenizing fungi including the Lecanoromycetes, the Eurotiomycetes, and the Dothidiomycetes. Using the sequences of these transporter genes as well as data from publically available genome sequences of diverse organisms, I constructed a phylogy of 513 ammonium transporter/ammonia permease sequences from 191 genomes representing all main lineages of life to infer the evolutionary history of this family of proteins. In this phylogeny I detected several horizontal gene transfer events, including the aforementioned one which was demonstrated to be not a transfer from plants to fungi or vise versa, but a gene gain from a group of phylognetically unrelated hyperthermophilic chemoautolithotrophic prokaryotes during the early evolution of land plants (Embryophyta), and an independent gain of this same gene in the filamentous ascomycetes (Pezizomycotina), which was subsequently lost in most lineages but retained in even distantly related lichenized fungi. Also demonstrated was the loss of the native fungal ammonium transporter and the subsequent replacement of this gene with a bacterial ammonium transporter during the early evolution of the fungi. Several additional recent horizontal gene transfers into lineages of eukaryotes were demonstrated as well. The phylogenetic analysis suggests that what has heretofore been conceived of as a protein family with two clades (AMT/MEP and Rh) is instead a protein family with three clades (AMT, MEP, and Rh). I show that the AMT/MEP/Rh family illustrates two contrasting modes of gene transmission: AMT family as defined here exhibits standard parent-to-offspring inheritance, whereas the MEP family as defined here is characterized by several ancient independent horizontal gene transfers (HGTs) into eukaryotes. The clades as depicted in this phylogenetic study appear to correspond to functionally different groups, with ammonium transporters and ammonia permeases forming two distinct and possibly monophyletic groups.

In Chapter Two I address a follow-up question: in key lichenizing lineages for which ammonium transporter/ammonia permease (AMTP) genes were not found in Chapter One, were the genes lost? The only definitive infomation which can demonstrate absence of a gene from a genome is a full genome sequence. To this end, the genomes of eight additional lichenizing fungi in the key clades including the Caliciales (sensu Gaya 2011), the Peltigerales, the Ostropomycetidae, the Acarosporomycetidae, the Verrucariales, the Arthoniomycetidae and the Lichinales were sequenced using the Ilumina HiSeq technology and assembled with the short reads assembly software Velvet. These genomes were searched for ammonium transporter/ammonia permease sequences as well as 20 test genes to assess the completeness of each assembly. The genes recovered were included in a refined phylogenetic analysis. The hypothesis that lichens symbiotic with a nitrogen-fixing cyanobacteria as a primary photobiont or living in high nitrogen environments lose the plant-like ammonium transporters was upheld, but did not account for additional losses of ammonium transporters/ammonia permeases in the Acarosporomyetidae and Arthoniomycetes. In addition, the four AMTP genes from <italic>Cladonia grayi</italic> were shown to be functional by expression of the lichen genes in a strain of <italic>Saccharomyces cerevisiae</italic> in which all three native ammonium transporters were deleted, and assaying for growth on limiting ammonia as a sole nitrogen source.

In Chapter Three I use genome data to address a developmental aspect of the lichen symbiosis. The finding that DNA in three genera of lichenizing fungi is methylated in symbiotic tissues and not methylated in aposymbiotic tissues or in the free-living fungus (Armaleo & Miao 1999a) suggested that epigenetic silencing may play a key role in the development of the symbiosis. Epigenetic silencing involves several steps that are conserved in many eukaryotes, including methylation of histone H3 at lysine 9 (H3K9) in nucleosomes within the silenced region, subsequent binding of heterochromatin-binding protein (HP1) over the region, and the recruitment of DNA methyltransferases to methylate the DNA, all of which causes the underlying chromatin to adopt a closed conformation, inhibiting the transcriptional machinery from binding. In this chapter I both identify the genes encoding the silencing machinery and determine the targets of the silencing machinery. I use degenerate PCR and genome sequencing to identify the genes encoding the H3K9 histone methyltransferase, the heterochromatin binding protein, and the DNA methyltransferases. I use whole genome bisulfite sequencing of DNA from the symbiotic structures of <italic>Cladonia grayi</italic> including podetia, squamules and soredia as well as DNA from cultures of the free-living fungus and free-living alga to determine which regions of the genome are methylated in the symbiotic and aposymbiotic states. In particular I examine regions of the genomes which appear to be differentially methylated in the symbiotic versus the aposymbiotic state. I show that DNA methylation is uncommon in the genome of the fungus in the symbiotic and aposymbiotic states, and that the genome of the alga is methylated in the symbiotic and aposymbiotic states.