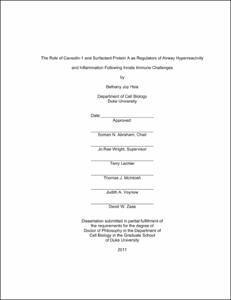 The lung is a unique organ, taking a key part physiology but also playing a vital role in host defense. The lung has therefore developed a complex innate immune system that includes ciliated mucus producing cells that trap and remove larger particles in the larger airways and a specialized set of immune cells in the smaller airways. In addition, a variety of host proteins play a vital role in the immune response in the lung. The structural protein caveolin-1 (cav-1) is known to play a role in the uptake of pathogens and controls a variety of signaling pathways, although less is known about its functions in the lung. Surfactant protein A (SP-A) is a secreted protein that is vital in the innate immune response by interacting with microbes and immune cells. The goal of this work was to further elucidate the specific mechanisms by which cav-1 and SP-A affect the host responses, including inflammation and airway hyperreactivity (AHR), to pathogens and particulates. Using a mouse model of environmental lung injury I show that cav-1 is vital in the host response to inhaled lipopolysaccharide (LPS). Although the cav-1 deficient mice had greater lung inflammatory indices compared to wild-type mice, they exhibited reduced AHR following LPS exposure. The uncoupling of these two parameters led me to investigate the role of cav-1 in the contraction of airway smooth muscle and production of nitric oxide, both of which are known to regulate AHR. The bronchi of cav-1 deficient mice contract less than those from wild-type mice although their structure and receptor independent responses were not altered. The absence of cav-1 also resulted in increased nitric oxide levels in the lavage fluid and increased inducible nitric oxide synthase expression in the lung tissue. Administration of the potent and specific inhibitor 1400W increased AHR to levels comparable to wild-type mice. Following intranasal infection with Mycoplasma pneumoniae mast cell numbers increase in the lungs of mice and AHR is dramatically attenuated in SP-A<super>-/-</super> mice when mast cells are absent. Using SP-A<super>-/-</super> Kit<super>W-sh/W-sh</super> mice engrafted with TNF-alpha<super>-/-</super> or TNF receptor (TNF-R<super>-/-</super>) mast cells, I find that TNF-alpha activation of mast cells via the TNF-R and not mast cell derived TNF-alpha, leads to augmented AHR during Mp infection. Additionally, Mp infected SP-A<super>-/-</super>Kit<super>W-sh/W-sh</super> mice engrafted with TNF-alpha <super>-/-</super> or TNF-R<super>-/-</super> mast cells have decreased mucus production compared to those engrafted with wild-type mast cells, while burden was unaffected. Together, these data help to further elucidate the role of cav-1 and SP-A in innate immunity and may lead to the development of more effective human therapies.