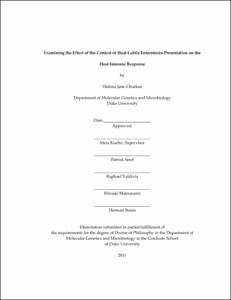 Enterotoxigenic Escherichia coli (ETEC), the leading cause of traveler's diarrhea and childhood mortality due to diarrhea in the developing world, has been shown to secrete heat-labile enterotoxin (LT) in association with outer membrane vesicles. However, studies on the effect of LT have been performed using soluble LT, which is not its physiologically relevant presentation context. The effect of LT associated with vesicles and its trafficking within human intestinal epithelial cells were compared with soluble LT. Cytokine responses and trafficking of standardized samples of soluble LT and vesicle-associated LT were evaluated in polarized intestinal epithelial cells. Using real-time PCR, immunoblotting, and ELISAs, we found that compared to soluble LT, vesicle-bound LT showed delayed kinetics in the activation of LT. Vesicles containing LT or not also produced cytokines through different signaling pathways than soluble LT. We found that this difference in signaling was due to different trafficking within the cell. Interestingly, not all LT associated with vesicles is active within cells. Vesicle-associated LT must bind to the host receptor GM1 in lipid rafts to be active within cells. This suggests that although vesicles can deliver large amounts of LT to a cell, much of the LT would be inactive and not produce a physiological response. To test this hypothesis, we attempted to develop animal models for ETEC-induced diarrhea. Although the models were largely unsuccessful, the mouse model appears promising for determining the physiological response of a host to LT as fluid accumulation was observed in response to vesicles containing LT. The results in this thesis provide further understanding of the mechanism of LT-induced diarrhea and emphasize the importance of study toxins in their natural context.