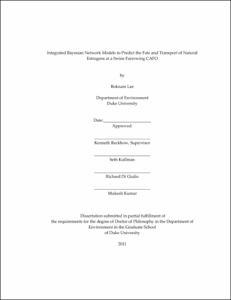 Natural steroidal estrogen hormones in swine wastes generated from Concentrated Animal Feeding Operations (CAFOs) have become a potential pollutant to many aquatic environments due to their adverse impacts on the reproductive biology of aquatic organisms. In North Carolina, the swine CAFO industry is a major agricultural economic enterprise that is responsible for the generation of large volumes of waste. However, there is limited scientific understanding regarding the concentration, fate, and transport of the estrogenic compounds from these swine facilities into terrestrial and aquatic environments. To address this issue, my research involved the development and application of integrated Bayesian networks (BNs) models that can be used to better characterize and assess the generation, fate, and transport of site-specific swine CAFO-derived estrogen compounds. The developed model can be used as decision support tool towards estrogen risk assessment. Modularized and melded BN approaches were used to capture the predictive and casual relationships of the estrogen budget and its movement within and between the three major systems of a swine farrowing CAFO. These systems include the animal barns, the anaerobic waste lagoon, and the spray fields. For the animal barn system, a facility-wide estrogen budget was developed to assess the operation-specific estrogen excretion, using an object-oriented BN (OOBN) approach. The developed OOBN model provides a means to estimate and predict estrogen fluxes from the whole swine facility in the context of both estrogen type and animal operating unit. It also accounts for the uncertainties in the data and in our understanding of the system. Next, mass balance melding BN models were developed to predict the natural estrogen fates and budgets in two lagoon compartments, the slurry and the sludge storage. This involved utilizing mass balance equations to account for the mechanisms of flushing, sorption, transformation, settling, and burial reactions of estrogen compounds in the slurry and sludge storages. As an alternative approach, a regression based BN melding approach was developed to both characterize estrogen fate and budgets as a result of the sequential transformation processes between natural estrogen compounds and to assess the seasonal effects on the estrogen budgets in the two different lagoon compartments. Finally, a dynamic BN model was developed to characterize rainfall-driven estrogen runoff processes from the spray fields. The dynamic BN models were used to assess the potential risk of estrogen runoff to adjacent waterways. In addition, the dynamic model was used to quantify the effects of manure application rates, rainfall frequency, the time of rainfall and irrigation, crop types, on-farm best management practices, seasonal variability, and successive rainfall and manure application events on estrogen runoff.

The model results indicate that the farrowing barn is the biggest contributor of total estrogen as compared to the breeding and gestation operating barns. Once the estrogen reaches the anaerobic lagoon, settling and burial reactions were shown to be the most significant factors influencing estrogen levels in the slurry and sludge, respectively. The estrogen budgets in the lagoon were also found to vary by season, with higher slurry and sludge estrogen levels in the spring as compared to the summer. The risk of estrogen runoff was predicted to be lower in the summer as compared to the spring, primarily due to the spray field crop management plans adopted. The results also indicated that Bermuda grass performed more favorably when compared to soybean, when it came to retaining surface water runoff in the field. Model predictions indicated that there is a low risk of estrogen runoff losses from the spray fields under multiple irrigation and rainfall events, unless the time interval between irrigation was less than 10 days and/or in the event of a prolonged high magnitude rainstorm event. Overall, the estrone was the most persistent form of natural estrogens in the three major systems of the swine farrowing CAFO.