Systematics, Phylogeography and Ecology of Elaphomycetaceae 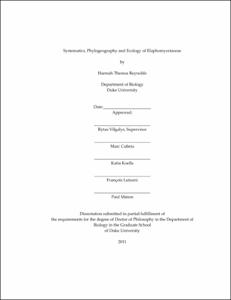 This dissertation is an investigation of the systematics, phylogeography, and ecology of a globally distributed fungal family, the Elaphomycetaceae. In Chapter 1, we assess the literature on fungal phylogeography, reviewing large-scale phylogenetics studies and performing a meta-data analysis of fungal population genetics. In particular, we examined the possible effects of asexuality, trophic niche, dispersal method, and ocean barriers on population structure. In Chapter 2, we examine the systematics and phylogeography of the Elaphomycetaceae, a family consisting of the truffle genus Elaphomyces and the stalked genus Pseudotulostoma, hypothesizing that the mammal-dispersed truffle would show evidence of dispersal limitation. Using DNA sequence data, we determined that Pseudotulostoma is derived from a lineage of Elaphomyces, indicating that Elaphomyces as currently defined is paraphyletic. The distribution of each subgenus of Elaphomyces is nearly global; representative species have been found on every continent save Africa and Antarctica. This biogeographic pattern does not follow the pattern expected by a scenario of continental vicariance. Dating analysis in BEAST confirmed that broadly distributed clades are, in most cases, too young for this pattern to be explained by continental vicariance, indicating that occasional long-distance dispersal has been a significant component in the biogeographic history of the Elaphomycetaceae. This finding contradicts our initial hypothesis that the mammal-dispersed truffles would be dispersal- limited. In Chapter 3, we investigate the role of Elaphomyces as a host for the fungal parasite Elaphocordyceps, a parasite derived from insect pathogens that attacks both insect larvae and Elaphomyces, its only fungal host. We examined the biogeography of Elaphocordyceps isolated from Elaphomyces specimens in order to test whether it, like its host, showed recent connections between the Southern and Northern Hemispheres. We also evaluated the pathogenicity of infection as determined by a visual rubric for the truffle gleba, the phylogenetic distribution of Elaphocordyceps species on its host, testing for seasonal, climate, and host-parasite effects. In Chapter 4, based on the phylogeographic pattern seen in Elaphomyces that resembles that of some air-dispersed fungi, we used theoretical and experimental methods to test whether Elaphomyces could be dispersed by air. We tested the capacity for air dispersal with an experimental test of passive air dispersal on the powdery spores of Elaphomyces morettii and found that these large spores could disperse over a short distance (10 m) in comparable numbers with the spores of the giant puffball Calvatia cyathiformis, which is known to be air-dispersed. The major findings of this thesis are that 1) fungi in general show high dispersal ability, but that trophic niche and dispersal mode may affect population structure, 2) that Pseudotulostoma, a stalked genus, is derived from the truffle Elaphomyces, 3) that the Elaphomycetaceae have experienced frequent long-distance dispersal despite 4) that the fitness of Elaphomyces as indicated by glebal development varies with host-parasite interactions based on species identity, but not with climate or season, and that 5) Elaphomyces spores, should they be released into the air, can remain in the air long enough to be dispersed long distances by the wind. The overall conclusion of this thesis is that, while Elaphomyces is clearly reliant on animal vectors for excavation and dispersal, its past history of long-distance dispersal and current spore trajectories indicate it can be passively air-dispersed as well.