An Umpolung Approach to the &#945;-Functionalization of Ketones and Aldehydes 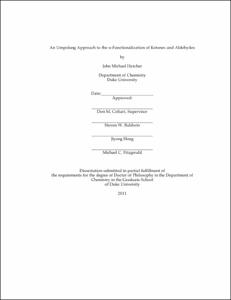 The &#945;-alkylation of N-sulfonyl hydrazones via in situ-derived azoalkenes provides an umpolung approach to ketone &#945;-alkylation that has considerable potential with regard to catalysis and the direct incorporation of functionality not amenable to the use of enolate chemistry. Herein, the first Cu(I)-catalyzed addition of Grignard reagents to in situ-derived N-sulfonyl azoalkenes is described. This method is remarkable in its ability to deliver highly sterically hindered compounds that would be difficult or impossible to synthesize via traditional enolate chemistry, including those having up to three contiguous quaternary centers. This method is compatible with a wide variety of &#945;-halo tosylhydrazones, including cyclic and acyclic &#945;-halo tosylhydrazones as well as those derived from both ketones and aldehydes. Also, herein, the first asymmetric organocatalytic sulfenylation of in situ-derived nitrosoalkenes leading to chiral nonracemic &#945;-sulfenylated ketones is described. The transformation proceeds in an umpolung fashion, relative to enolate/azaenolate methods, and uses simple thiols, thereby obviating the need for elecrophilic sulfur reagents. Moreover, excellent ee's were obtained starting from a variety of &#945;-chloro oximes, including cyclic and acyclyic systems. Chiral nonracemic sulfur containing compounds are important both biologically, and in synthetic context through their use as chiral auxiliaries, ligands for metal catalysis, and organocatalysts. Also, herein, the addition of cuprates to &#945;,&#946;-epoxy tosylhydrazones is described. The transformation is operationally simple and efficient and has the unusual feature of giving high syn selectivity, which is opposite of that produced by a simple SN2-type epoxide opening reaction. This method compatible with &#945;,&#946;-epoxy tosylhydrazones with additional &#945;-substitution, which provides access to aldol-like products that would be impossible to make using traditional enolate chemistry. Moreover, this method is compatible with a wide variety of both cyclic and acyclic &#945;,&#946;-epoxy tosylhydrazones, and produces dr's of >20:1.