Poverty, Charity and the Image of the Poor in Rabbinic Texts from the Land of Israel 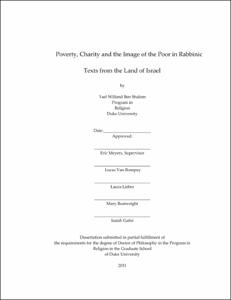 This study examines how rabbinic texts from the land of Israel explain and respond to poverty. Through this investigation, I also analyze images of the poor in this literature, asking whether the rabbis considered poor persons to be full participants in communal religious life. Within the context of rabbinic almsgiving, this study describes how Palestinian rabbis negotiated both the biblical commands to care for the poor and Greco-Roman notions of hierarchy, benefaction and patronage.

The sources at the heart of this study are Tannaitic texts: the Mishnah, the Tosefta and Tannaitic midrashim; and Amoraic texts: the Yerushalmi (Palestinian Talmud) and the classical Amoraic Midrashim - Genesis Rabbah, Leviticus Rabbah and Pesiqta de Rab Kahana. Other texts such as Babylonian Talmud, non-rabbinic and non-Jewish texts are included in this study only when they are able to shed light on the texts mentioned above. In reading rabbinic texts, I pay close attention to several textual features: distinctions between Tannaitic and Amoraic compositions, as well as between rabbinic texts from the land of Israel and the Babylonian Talmud, and evidence of texts that were influenced by the Babylonian Talmud. This method of careful assessment of texts according to their time of composition and geographic origin forms the basis of this investigation.

I suggest various factors that shaped Palestinian rabbinic approaches to poverty and almsgiving, including: the biblical heritage, the Greco-Roman and Byzantine environments, the diverse socio-economic status of the rabbis, and their adherence to "measure for measure" as a key hermeneutic principle.

The study also portrays how the rabbinic charitable system evolved as an expansion of the biblical framework and through engagement with Greco-Roman notions and practices. This unique system for supporting the poor shows evidence of the adoption of select Greco-Roman customs and views, as well as the rejection of other aspects of its hegemonic patterns. We have seen that the language of patronage is absent from the Mishnah's articulation of the rabbinic charitable model.

Several of the texts analyzed in this study indicate that, for the rabbis, the poor were not necessarily outsiders. Following the main stream of biblical thinking, where the ordinary poor are rarely considered sinners who bear responsibility for their abject situation, Palestinian rabbinic texts seldom link ordinary poverty to sinful behavior. In these texts, the poor are not presented as passive recipients of gifts and support, but as independent agents who are responsible for their conduct. Moreover, rabbinic teachings about support for the poor reveal not only provisions for basic needs such as food, clothing and shelter but also attention to the dignity and the feelings of the poor, as well as their physical safety and the value of their time.