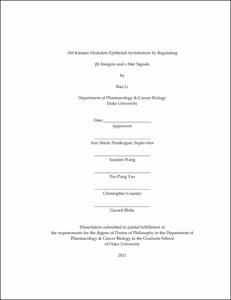 Normal development and homeostasis require dynamic and tight regulation of epithelial architecture. Abnormal epithelial physiology is associated with various pathological conditions including cancers, and may be induced by changes in epithelial polarity, morphology and/or movement. Among the signaling pathways modulating epithelial physiology are those downstream of integrins and receptor tyrosine kinases (RTKs). Although roles of multiple integrins and RTKs in epithelium homeostasis have been established, the identity of signals regulating the functions of these surface receptors and the pathways connecting them to the regulation of epithelial architecture remain largely unknown. In this dissertation, I have identified the Abl family of non-receptor tyrosine kinases (Abl and Arg) as regulators of beta1 integrin and Met receptor tyrosine kinase signaling.

Abl family kinases are hyper-activated in multiple solid tumors and implicated in epithelial polarity regulation. Dysfunction of beta1 integrin is also associated with carcinoma development. To study the role of the Abl family member Arg in epithelial cell polarity, I have taken advantage of a three-dimensional (3D) cell culture system, where Madin Darby canine kidney type II (MDCKII) cells grown in collagen gels develop into polarized cyst structures. I have found that expression of active Arg kinase results in the formation of cysts with inverted apical polarity and that active Arg modulates epithelial polarity by regulating beta1 integrin and small GTPases pathways. In addition, I have shown that Arg regulates the Rap1-beta1 integrin pathway independently of the Rac1 pathway which promotes basal laminin assembly. I have also found that Abl family kinases function downstream of Met and that Abl kinase hyperactivity correlates with Met activation in a mouse mammary tumor model. Abl kinases are activated by HGF which is the ligand for Met, and active Abl kinases are recruited to the Met receptor and promote its tyrosine phosphorylation. Using fluorescence resonance energy transfer (FRET), I have found that Abl kinases regulate RhoA GTPase activity which contributes to actomyosin contractility induced by Met receptor activation. Further, Abl kinases positively regulate Met-dependent migration and invasion induced by HGF in several breast cancer cell lines.

In conclusion, I have identified novel functions of the Abl kinases in epithelial architecture regulation: modulation of epithelial polarity by targeting beta1 integrin function and promotion of Met signaling required for migration and invasion. This has important implications as it suggests potential roles for Abl kinases in carcinoma initiation mediated by beta1 integrin dysfunction, and development of Abl kinases inhibitors for treatment of cancers driven by hyper-activation of HGF-Met signaling.