Song of the Morrígan for Chamber Orchestra, Cries of Revelation for Chorus, Soloists and Large Instrumental Ensemble, and Fragments of a Dream for 5.1 Surround Electronics 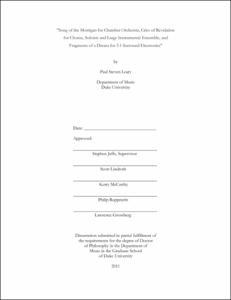 This dissertation consists of three independent musical compositions that represent a diversity of my compositional interests. The first work is titled Song of the Morrígan and is written for chamber orchestra with piano and two percussionists. The Morrígan is a figure from Irish mythology, a goddess of battle, strife, and fertility. While the Morrígan has conflicting roles and forms in Irish mythology, the most common is that of a war goddess. In this role, like the Norse Valkyries, the Morrígan intervenes in battle to choose which warrior will live and which will die. The Morrígan often takes the form of a crow or a raven, whose presence can represent both as an omen or a curse. Musically, the concept for Song of the Morrígan was one of relentless rhythmic motion., driven by rhythm.

The second piece, entitled Cries of Revelations, is scored for SATB chorus, soloists, string orchestra, horn, and 6 channel electronics. This piece is framed about two apocalyptical texts; the first is Revelation, from the Christian Bible. The second text is taken from 19th century Scottish Christian mystic Margaret MacDonald, who wrote Christian visionary texts, reminiscent of the visions of Hildegard of Bingen. McDonald's text offers multi-layered thematic material and imagery with which to shape this musical work as a contemporary statement of relevance. I set this text in contrast with passages from the Book of Revelation, which occupy the first half of the piece. The Revelation text prepares the listener with vivid imagery of the second coming, which concludes with verses that call for preparation for the end times.

The Sacred Minimalist music of the 1970s and 80s, most specifically Arvo Pärt, has heavily influenced my choral compositions. Cries of Revelation similarly explores music of contemplation and diatonic and modal tonality, drawing on Renaissance polyphony and musical idioms such as hocket and Renaissance cadential and voice- leading procedures. The musical form of Cries of Revelation is dictated by the contrasting texts, which divides the work into two tonal centers. Each section takes on the character of the text, the first being violent, dramatic, and relatively dissonant. The second section is one of tonal resignation in the face of man's helplessness in the face of the unknown.

Finally, the third piece of this dissertation is a solo work entitled Fragments of a Dream, for 5.1 surround sound electronics with video by visual artist Christian Faur of Denison University. Fragments of a Dream exists in that place between awake and sleep, the

hypnopomic state that leads us out of dreams. Consciousness bleeds into our dream state, colors and images of dreams and nightmares mix and clash with hints of awakeness. The concept of this work is framed around the transient, endless possibilities that dreams represent. In this place, imagination runs freely and seemingly unrelated events and images combine, contrast, and transition without boundaries. The primary sound engines in Fragments of a Dream synthesize hundreds of diverse found and sampled sounds through granular synthesis. Some of the samples used in this work include birdcalls, machinery, various animal sounds, water droplets, human vocalizations, singing bowls, and Tibetan singing bowls. Fragments of a Dream was assembled, mixed and mastered in Logic Pro. A video by visual artist Christian Faur of Denison University compliments the live performance.