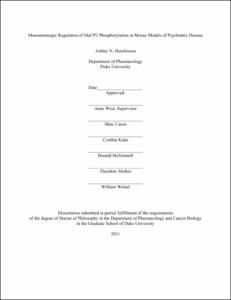 Activation of monoaminergic receptors is essential to the mechanism by which psychostimulants and antidepressants induce changes in behavior. Although these drugs rapidly increase monoaminergic transmission, they need to be administered for several weeks or months in order to produce long-lasting alterations in behavior. This observation suggests that it is likely that molecular mechanisms downstream of receptor activation contribute to the effects of psychostimulants and antidepressants on behavior.

Recently, we and others have demonstrated that the methyl-CpG-binding protein 2 (MeCP2) contributes to both neural and behavioral adaptations induced by repeated psychostimulant exposure (Deng et al, 2010, Im et al, 2010). Psychostimulants induce rapid and robust phosphorylation of MeCP2 at Ser421 (pMeCP2), a site that is thought to modulate MeCP2-dependent chromatin regulation (Cohen et al, 2011), and this phosphorylation event is selectively induced in the GABAergic interneurons of the nucleus accumbens (NAc). In order to understand the signaling pathways that contribute to the pattern of pMeCP2 we observe, I characterized the monoaminergic signaling pathways that regulate pMeCP2. I found that activation of dopamine (DA) and serotonin (5-HT) transmission is sufficient to induce pMeCP2. The novel finding that drugs that activate serotonergic signaling induce pMeCP2 suggests that pMeCP2 may be involved in serotonergic mediated behaviors.

To determine the requirement of pMeCP2 in serotonergic mediated behaviors, I utilized mice that bear a knockin (KI) mutation that converts serine to alanine at 421 (S421A) (Cohen et al, 2011). After characterizing the behavioral phenotype of these mice, I conducted tests to assess anxiety- and depression-like behavior. I found that the KI mice do not display heightened anxiety in several assays. However, the KI mice exhibit depression-like behavior in the forced swim and tail suspension but show no differences compared to wild-type (WT) littermates in the sucrose preference test, suggesting that pMeCP2 may be implicated in the behavioral response to stressful stimuli.