Bodily Trespass: An Ecology of the Fantastic in Twentieth-Century African American Literature 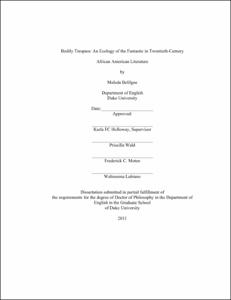 <italic>Bodily Trespass</italic> situates the fantastic as a discourse of spatial production in twentieth-century black American literature. Eruptions of the fantastic in realist and surrealist narratives index and ameliorate the spatial constriction that informs black American subjectivity from the Middle Passage up through to the contemporary carceral state. The black fantastic is a narrative response to a spatial crisis that is corporeal and ontological. As a literary mode, in the Todorovian sense, the fantastic identifies the real as a production of the "unreal" and calls attention to ideological and institutional apparatuses that sustain the dominant order. Taking Pauline Hopkins' turn of the twentieth-century serial <italic>Of One Blood, Or, The Hidden Self</italic> as a point of departure, this project examines the fantastic as a discourse of Pan-Africanism during a period Farah Griffin describes as the "nadir" of post-emancipation black life. Hopkins reaches outside of U.S. borders suturing Ethiopia to America in order to fashion a new and "rival" black geography that challenges the eradication of black legal, civic, and social space.

In the postwar years, the production of imaginative space extends to the task of recording and refuting the racial discourse that articulates urbanity. Chester Himes' <italic>The Real Cool Killers</italic>, Ann Petry's <italic>The Street</italic>, and Gwendolyn Brooks' <italic>Maud Martha</italic> depict racially encoded urban geographies as corporeally informed psychosocial "interfaces." These novels identify cartographic locution as a strategy for spatial occupation and psychic rehabilitation. James Baldwin's "Sonny's Blues" and Ralph Ellison's "The King of the Bingo Game locate in the sonic a blueprint for refashioning the space of the modern metropolis according to a logic of interiority. Baldwin and Ellison identify the fantastic as a discourse of aurality that alters the texture of space by channeling what I call "scalar consciousness," a heightened awareness of the ways in which one might manipulate scale in the service of spatial production. Meditations on belonging, displays of corporeal violence, discourses of Africanity, and the identification of the aural as a pathway for liberation illustrate, in all these works, the black fantastic's rootedness in spatial production, subject formation, and resistance to a dehumanizing social order.