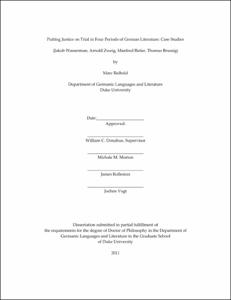 This dissertation explores arguments against legal and authoritarian structures as thematized by four works of fiction from distinct periods of German history: Jacob Wasserman's Der Fall Maurizius (the Weimar Republic), Arnold Zweig's Das Beil von Wandsbek (the Third Reich), Manfred Bieler's Das Kaninchen bin Ich (post-war division of Germany), and Thomas Brussig's Leben bis Männer (Germany after reunification). The aim of my analysis is to define how each work builds a "case" against the state. It conducts a literary analysis of each work, which it places in its own cultural and political context. It then compares this case to German theories of law to determine points at which the work is in dialogue with pressing questions of justice particular to its legal epoch: Der Fall Maurizius (1928) builds a case against the state by juxtaposing positivist and natural law, yet ultimately cannot avoid the axiomatic nature of each position; Das Beil von Wandsbek (1938-43) is a Marxist morality play whose concept of justice proves insufficient to its own implied standards; Maria Morzeck oder Das Kaninchen bin ich (1969) engages the GDR's 1961 law reform directly, yet in its development from GDR film to FRG novel softens its critique of the state by thematizing its own literary limitations; and Leben bis Männer (2001) argues against Germany's post-reunification trials of former GDR border guards, but exposes its own plea for a sympathetic view of the GDR.