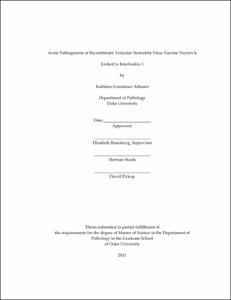 Recombinant vesicular stomatitis virus (rVSV) is a promising candidate viral vaccine vector for use in humans. VSV is highly immunogenic, pre-existing immunity to VSV is rare, and VSV is able to grow to high titers in cell lines approved for vaccine use. Its potential reactogenicity is a barrier to its use in humans, with small laboratory animals developing fever and losing up to 20% of their pre-immunization body weight in the first four days after administration [1, 2], and the one person to date that has received an experimental rVSV vaccine developed headache, fever, and muscle pain within 12 hours and transient VSV viremia was detected [3]. The underlying cause of these reactions has not yet been studied. Here, we have found that IL-1&beta; and/or IL-1&alpha; contributes to rVSV pathology after intramuscular immunization in mice and that IL-1 production is not required for control of rVSV replication in vivo, or for the generation of protective immune responses to VSV antigens. Suppression of IL-1 may be a safe strategy to reduce vector reactogenicity without affecting immunogenicity. Utilizing mice deficient in either ASC or caspase-1, we have also found that production of mature IL-1&beta; in response to rVSV might be independent of inflammasome activation or caspase-1 cleavage. The exact mechanism is yet to be determined, but might depend upon which cell types secrete mature IL-1&beta; after immunization.