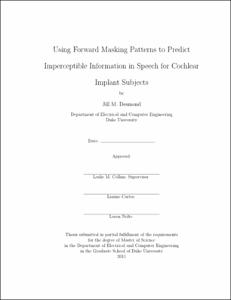 Forward masking is a phenomenon that occurs when one stimulus (masker) elevates the threshold for perception of a subsequent stimulus (probe). In cochlear implant listeners, it has been hypothesized that interactions between electrodes (termed channel interactions) can have a deleterious effect on speech recognition (Chatterjee and Shannon, 1998; Throckmorton and Collins, 1999). Forward masking is one measure that has been used to assess channel interactions (Shannon, 1983; Tong and Clark, 1986; Lim et al., 1986; Shannon, 1990; Blamey and Dooley, 1993; Chatterjee and Shannon, 1998), and it has also been proposed as a mechanism that could be used to assess information that is being presented to but is not received by the user (Throckmorton and Collins, 1999; Nogueira et al., 2005). Determining information that is not received by the user, or is masked, has the potential to provide guidance for the design of new speech processing algorithms that either work to reduce lost information or substitute alternate information.

The masked stimuli were also used to statistically evaluate the segments of speech that are most vulnerable to masking. These results suggest that the amount of masking that occurs per phoneme depends on the characteristics of the subject-specific masking patterns.