Evaluating Medicine Retailer Knowledge and Practice in the Diagnosis and Treatment of Malaria in Western Kenya: An Opportunity for Improved Malaria Case Management 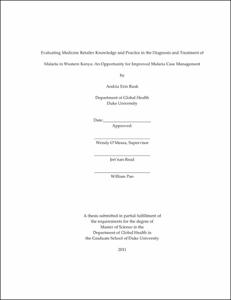 Malaria remains one of the world's most significant global health challenges. Claiming nearly a million lives each year in Africa alone, this continent bears an especially large part of the malaria disease burden, and with 85% of those deaths among children under the age of 5, better management of malaria cases is critical to the healthy future of the nearly 3.3 billion people at risk of malaria infection .

Improving malaria control is critical to reducing the mortality and morbidity caused by the disease. Key steps to achieving this reduction are early diagnosis, accurate and appropriate treatment, and increased access to these services. In western Kenya, as in much of East Africa, this means improving malaria case management in the informal health sector, specifically in medicine retail locations.

Understanding medicine retailer knowledge and behaviors related to malaria diagnosis and treatment is an important part of improving those practices and thereby the control of malaria in these areas. Two studies were recently conducted that focused on these goals. The first, a quantitative study, examined antimalarial recommendation and dispensing practices and antimalarial knowledge among retailers in the Bungoma East district of western Kenya. The second is a qualitative study investigating retailer diagnostic practices, and their perceptions and concerns regarding alternative diagnostic methods, specifically the use of rapid diagnostic tests for malaria, and how their use might influence medicine retailer behavior.

The quantitative survey found that, while more than half of the participants could identify the correct firstline antimalarial medication, less than half of those would recommend it to children. Customer demand, retailer training, education, and drug stocking and dispensing behaviors were all identified as factors influencing the relationship between knowing the correct antimalarial therapy and recommending it. Many opportunities were discovered to improve appropriate use of antimalarials in this setting. Ensuring that all medicine retailers have at least a basic health training and level of education would improve antimalarial drug knowledge. Educating the community on current antimalarial therapies could help alter the pressure of customer demand to align with appropriate treatment.

The qualitative study found that retailers rely heavily on clinical diagnosis to detect malaria in sick customers, even though they are aware of the limitations of such methods, particularly given the symptomatic similarity of several other diseases. Rapid diagnostic tests for malaria were seen as a viable and profitable solution to achieve a more accurate diagnosis. Medicine retailers felt the tests could bring new customers to their businesses, increase sales, and result in increased patient and provider confidence in the accuracy of the diagnosis, which may increase usage and adherence.

However, there were concerns regarding cost, patient acceptance, and issues that may arise with regulatory boards concerning unregistered retail locations in the area. Overall, medicine retailers felt that most of these issues could be overcome if the regulatory bodies were involved in implementation, if their communities were educated on the importance of testing for malaria before treatment, and if they received training on the use, interpretation, and application of the tests.

Both studies identified opportunities for improvement of the management of malaria through interventions focused on retail drug locations. Training, education, and community and leadership involvement were recognized as key components to the success of future implementation efforts. By increasing access to definitive malaria diagnosis, improving the appropriate use of antimalarial therapies, and increasing access to both of these services, incidences of malaria could be better managed, treated, controlled, and eradicated.