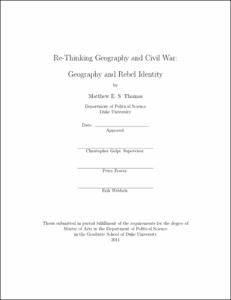 Scholarship on ethnic conflict and civil war has often examined the role of geographic factors, such as rough terrain and exploitable natural resources, in either prolonging or even initiating the conflict. However, many of these studies focus upon the material/tactical advantages that geography provides to the rebels. I argue that analysis of geography and civil war must account for the effects of geography upon the insurgency's identity (ethnic, religious, ideological), which is the most decisive factor in the rebels' ability to galvanize popular support. Using regression analysis and case studies, I demonstrate that while the geographic distance between rebel territory and the capital city in a war-afflicted country is of great importance, the presence of identity can compensate for the lack of favorable geography.