Influence of Modes of Climate Variability on Global Temperature Extremes 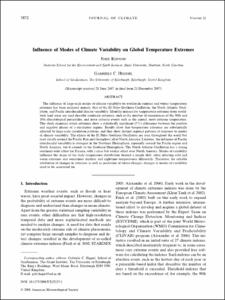 View / Download
2.6 Mb
Date
Author
Kenyon, Jesse
Repository Usage Stats
322
views
463
downloads
Abstract
The influence of large-scale modes of climate variability on worldwide summer and winter temperature extremes has been analyzed, namely, that of the El Niño–Southern Oscillation, the North Atlantic Oscillation, and Pacific interdecadal climate variability. Monthly indexes for temperature extremes from worldwide land areas are used describe moderate extremes, such as the number of exceedences of the 90th and 10th climatological percentiles, and more extreme events such as the annual, most extreme temperature. This study examines which extremes show a statistically significant (5%) difference between the positive and negative phases of a circulation regime. Results show that temperature extremes are substantially affected by large-scale circulation patterns, and they show distinct regional patterns of response to modes of climate variability. The effects of the El Niño–Southern Oscillation are seen throughout the world but most clearly around the Pacific Rim and throughout all of North America. Likewise, the influence of Pacific interdecadal variability is strongest in the Northern Hemisphere, especially around the Pacific region and North America, but it extends to the Southern Hemisphere. The North Atlantic Oscillation has a strong continent-wide effect for Eurasia, with a clear but weaker effect over North America. Modes of variability influence the shape of the daily temperature distribution beyond a simple shift, often affecting cold and warm extremes and sometimes daytime and nighttime temperatures differently. Therefore, for reliable attribution of changes in extremes as well as prediction of future changes, changes in modes of variability need to be accounted for.
Type
Journal article
Permalink
https://hdl.handle.net/10161/5070
Collections
More Info
Show full item record