The Impact of CO2 Allowance Prices and Retail Electricity Rates 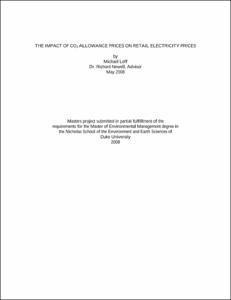 View / Download
292.6 Kb
Date
Author
Leff, MIchael
Advisor
Newell, Richard G
Repository Usage Stats
804
views
1,438
downloads
Abstract
Climate change policy is likely on the horizon in the United States. A cap and trade program for CO2 will result in increased expenses for major emitting firms throughout the economy. Since the electric power sector emits 41% of the nations CO2 emissions, such a policy will have a significant impact on the industry. This masters project examines the potential impacts of a cap and trade program for CO2 on retail electricity rates. It gives a brief overview of the different treatment of emissions prices in regulated and deregulated electricity markets in the United States. The influence of the SO2 cap and trade program for acid rain and the European Union Emissions Trading System for CO2 on retail rates was examined. The potential impact of proposed U.S. climate policy on retail rates was looked at as well. The retail rate impact of a CO2 allowance price is likely to vary amongst states, due to differences in regulatory structure and generation portfolios. In order to highlight these variations, the impacts of a CO2 price of $5/ton, $20/ton, and $60/ton on rates in North Carolina, New Jersey, and Washington State were examined. The analysis showed how any impact of CO2 allowance prices on retail electricity rates will be dependent upon the state regulatory structure, the allocation of emissions allowances, price of allowances, and the current generation portfolio in the state. Depending on these different assumptions, the resulting increases in retail electricity rates ranged from as low as 0.05% to as high 41% across all three states. Rates in North Carolina and New Jersey increased significantly more than in Washington State, due to its high percentage of hydro-electric power generation. It was also shown that in a scenario with a hybrid of auction and free allowance allocation, regulatory treatment and the point of allocation are the key determinants for the degree of cost pass through from the generator to the ratepayer. The results highlight how key climate policy issues might interact with the fundamental operations of electric power markets to determine the eventual of impact on ratepayers.
Type
Master's project
Department
Nicholas School of the Environment and Earth Sciences
Subject
Energy
Electricity
Climate change
Environment
Permalink
https://hdl.handle.net/10161/508
Citation
Leff, MIchael (2008). The Impact of CO2 Allowance Prices and Retail Electricity Rates. Master's project, Duke University. Retrieved from https://hdl.handle.net/10161/508.
Collections
More Info
Show full item record