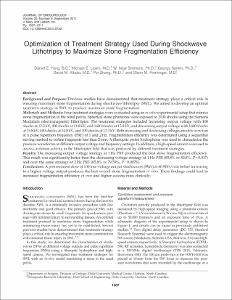 Gendell Family Professor of the Practice Professor in the Department of Mechanical Engineering and Materials Science
My research focuses on four broad and interconnected areas in the emerging field of therapeutic ultrasound, which is located at the interface of engineering, biology and clinical medicine. Current research interests in my group include: Ultrasound-targeted gene delivery and activation Synergistic combination of high-intensity focused ultrasound (HIFU) and immunotherapy for cancer treatment Innovations in shock wave lithotripsy (SWL) technology</l
Alphabetical list of authors with Scholars@Duke profiles.