Parmelia barrenoae, a macrolichen new to North America and Africa 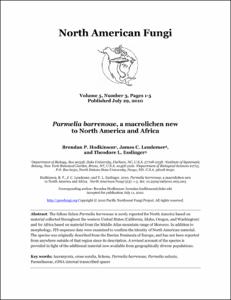 View / Download
1.1 Mb
Date
Authors
Esslinger, Theodore L
Hodkinson, Brendan
Lendemer, James C
Repository Usage Stats
241
views
256
downloads
Abstract
The foliose lichen Parmelia barrenoae is newly reported for North America based on material collected throughout the western United States (California, Idaho, Oregon, and Washington) and for Africa based on material from the Middle Atlas mountain range of Morocco. In addition to morphology, ITS sequence data were examined to confirm the identity of North American material. The species was originally described from the Iberian Peninsula of Europe, and has not been reported from anywhere outside of that region since its description. A revised account of the species is provided in light of the additional material now available from geographically diverse populations.
Type
Journal article
Subject
Ascomycota
erose soralia
lichens
Parmelia barrenoae
Parmelia sulcata
Parmeliaceae
rDNA internal transcribed spacer
Permalink
https://hdl.handle.net/10161/5091
Collections
More Info
Show full item record