Comparative hydrology across AmeriFlux sites: The variable roles of climate, vegetation, and groundwater 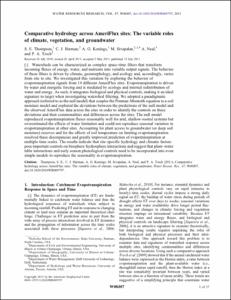 View / Download
1.3 Mb
Date
Authors
Thompson, SE
Harman, CJ
Konings, AG
Sivapalan, M
Neal, A
Troch, PA
Repository Usage Stats
363
views
322
downloads
Abstract
Watersheds can be characterized as complex space‐time filters that transform incoming fluxes of energy, water, and nutrients into variable output signals. The behavior of these filters is driven by climate, geomorphology, and ecology and, accordingly, varies from site to site. We investigated this variation by exploring the behavior of evapotranspiration signals from 14 different AmeriFlux sites. Evapotranspiration is driven by water and energetic forcing and is mediated by ecology and internal redistribution of water and energy. As such, it integrates biological and physical controls, making it an ideal signature to target when investigating watershed filtering. We adopted a paradigmatic approach (referred to as the null model) that couples the Penman‐Monteith equation to a soil moisture model and explored the deviations between the predictions of the null model and the observed AmeriFlux data across the sites in order to identify the controls on these deviations and their commonalities and differences across the sites. The null model reproduced evapotranspiration fluxes reasonably well for arid, shallow‐rooted systems but overestimated the effects of water limitation and could not reproduce seasonal variation in evapotranspiration at other sites. Accounting for plant access to groundwater (or deep soil moisture) reserves and for the effects of soil temperature on limiting evapotranspiration resolved these discrepancies and greatly improved prediction of evapotranspiration at multiple time scales. The results indicate that site‐specific hydrology and climatic factors pose important controls on biosphere‐hydrosphere interactions and suggest that plant–water table interactions and early season phenological controls need to be incorporated into even simple models to reproduce the seasonality in evapotranspiration.
Type
Journal article
Permalink
https://hdl.handle.net/10161/5112
Published Version (Please cite this version)
10.1029/2010WR009797
Citation
Thompson, S. E., C. J. Harman, A. G. Konings, M. Sivapalan, A. Neal, and P. A. Troch (2011), Comparative hydrology across AmeriFlux sites: The variable roles of climate, vegetation, and groundwater, Water Resour. Res., 47, W00J07, doi:10.1029/2010WR009797.
Collections
More Info
Show full item record