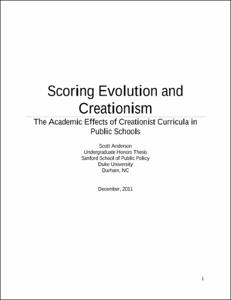 View / Download
573.3 Kb
Date
Author
Anderson, Scott
Repository Usage Stats
357
views
647
downloads
Abstract
From 2002 to 2006, Cobb County, Georgia placed controversial stickers on high school biology textbooks which were critical of evolution. This study uses the differences-in-differences method to analyze what effects the sticker policy had on biology student test performance. Data collected from 2003 to 2010 suggest that the removal of the stickers in 2006 resulted in both a higher failure rate and a lower rate of pass plus scores in Cobb County schools. However, these results suggest that any effect the stickers had on student performance was minimal. This study concludes that students learn better when the material being learned relates to events outside of the classroom and are seen by students as controversial.
Type
Honors thesis
Department
Public Policy Studies
Subject
Creationism
Evolution
Cobb County
Science Curriculum
Permalink
https://hdl.handle.net/10161/5121
Citation
Anderson, Scott (2011). Scoring Evolution and Creationism. Honors thesis, Duke University. Retrieved from https://hdl.handle.net/10161/5121.
Collections
More Info
Show full item record