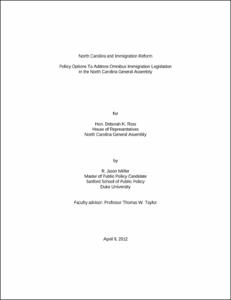 View / Download
390.6 Kb
Date
Author
Miller, R. Jason
Advisor
Taylor, Thomas W
Repository Usage Stats
392
views
1,456
downloads
Abstract
Despite no significant movement toward comprehensive federal immigration reform since 2007, stakeholders from virtually all points on the political spectrum continue to call for an overhaul. In the meantime, states have increasingly come to participate in enforcing federal immigration law. One program advancing this trend is 287(g), under which state and local law-enforcement authorities—including several in North Carolina—partner with U.S. Immigration and Customs Enforcement in order to help enforce federal immigration law. Another is E-Verify, a federally administered program that allows employers to use certain identifying documents to verify the residency status of employees; many states—including North Carolina—have made use of the E-Verify program mandatory for public employers, private employers, or both. Many state legislatures have recently gone one step further in the direction of enforcing immigration law by enacting a wave of major state immigration laws. Arizona led the charge with its 2010 Support Our Law Enforcement and Safe Neighborhoods Act (popularly known as “SB 1070”); Utah, Georgia, Indiana, Alabama, and South Carolina soon followed suit. These laws have proven controversial, and challenges in the federal court system have so far met mixed results. The major common provisions require law-enforcement officers to determine the immigration status of anyone involved in a lawful stop, detention or arrest or anyone about whose immigration status a reasonable suspicion exists; create a presumption of lawful presence upon presentation of an identification card; and prohibit state and local law enforcement from interfering with federal enforcement of immigration. These and other provisions of these laws are discussed in Part II.B of this report. The Utah law includes several unique provisions. One creates a new temporary–guest-worker program in which currently unauthorized residents can, among other requirements, pay a fine and stay legally in the state. The law also creates two pilot programs, one allowing current citizens to sponsor immigrants for residency and another creating a partnership between Utah and the Mexican state of Nuevo Léon to facilitate migrant laborers filling jobs in Utah. Part III discusses immigration in North Carolina and recent legislation addressing it. The population of North Carolina grew by 1.3 million people between 2000 and 2009. Sixteen percent of this population growth is attributable to immigration from other countries, and these immigrants are overwhelmingly Hispanic. Between 2000 and 2010, the number of Hispanic North Carolina residents more than doubled to 800,120 (8.4 percent of the population). Recent North Carolina legislation on immigration has both mandated the use of E-Verify by all employers and extended in-state community-college tuition rates to certain U.S. nonresidents. With the new Republican majority in both houses of the North Carolina General Assembly and the formation of the House Select Committee on the State’s Role in Immigration Policy, serious consideration of omnibus immigration legislation seems likely, leading to the question addressed by this report: What policy should North Carolina adopt regarding state-level enforcement of immigration law? Part V of this report outlines four responsive policy options: A. Pass a law similar to Arizona’s Support Our Law Enforcement and Safe Neighborhoods Act or Alabama’s Beason-Hammon Alabama Taxpayer and Citizen Protection Act; B. Pass a law similar to Utah’s provisions for a guest-worker program and migrant-worker and sponsorship pilot programs; C. Require or encourage increased participation in the 287(g) program and greater enforcement under the current state-law framework; and D. Require a study on the state-level effects of immigration and accompanying recommendations, potentially leading to a long phase-in process for any new immigration laws. Part IV discusses the four criteria against which each of these options should be measured: A. Political feasibility; B. Effect on labor pool; C. Monetary cost; and D. Fairness. Part VI analyzes each of the four policy options numerically and descriptively according to the four criteria and includes a table compiling the scores. Part VII includes the report’s recommendations: Oppose any legislation similar to Arizona’s Support Our Law Enforcement and Safe Neighborhoods Act or Alabama’s Beason-Hammon Alabama Taxpayer and Citizen Protection Act; If such a bill is passed, support the addition of Utah-style labor provisions and study provisions potentially leading to a long phase-in; and If such a bill is not passed, support independent legislation including Utah-style labor provisions.
Type
Master's project
Department
The Sanford School of Public Policy
Subject
Immigration
Legislation
North Carolina
Public Policy
State
Permalink
https://hdl.handle.net/10161/5125
Citation
Miller, R. Jason (2012). North Carolina and Immigration Reform: Policy Options To Address Omnibus Immigration Legislation in the North Carolina General Assembly. Master's project, Duke University. Retrieved from https://hdl.handle.net/10161/5125.
Collections
More Info
Show full item record