Restoring a River of Grass: Everglades policy recommendations for a climate change alternative 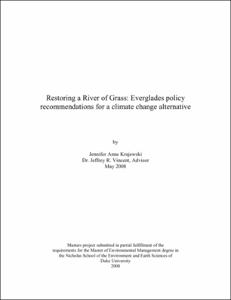 View / Download
2.1 Mb
Date
Author
Krajewski, Jennifer
Advisor
Vincent, Jeffrey R
Repository Usage Stats
386
views
712
downloads
Abstract
One of the largest and most extensive wetland systems in the United States is contained within the Florida Everglades National Park. Like most of the world’s wetlands it has been reduced to half of its size and heavily altered by human pressures. The Everglades were heavily drained during the first half of the 1800’s for agriculture and development. Further changes occurred after Congress authorized the Central and South Florida Project in 1948. Regrettably, the network of canals, levees, and roads created by the Central and South Florida Project greatly altered the water regime, starved the Everglades of its natural water flow, and compartmentalized the landscape. In an effort to reverse the impacts of earlier projects and to restore the natural hydropattern, Congress authorized the Comprehensive Everglades Restoration Plan (CERP) in 2000. However, future potential climate change impacts were not taken into consideration during the CERP planning process. The Everglades are extremely vulnerable to global climate change including: rising sea levels and sea surface temperatures, increased erosion, hurricane intensity and duration, saltwater intrusion and changes in precipitation. Therefore, it is important to consider Everglades’ restoration plans in light of global climate change. None of the restoration alternatives evaluated by CERP would be successful as a climate change alternative because global climate change predictions were not considered during the modeling and evaluation process. Failure to include future potential changes undermines any plan’s ability to restore the Everglades. This project investigates the potential climate change impacts for the Everglades National Park and provides policy recommendations regarding the inclusion of climate change predictions in the planning and implementation process. The three recommendations proposed include: the incorporation of current climate change predictions in the hydrologic and ecologic computer-based models, the monitoring and mapping of salinity levels within the Everglades National Park, and the use of the coastal vulnerability index to assess the vulnerability of the coastline of south Florida to future changes in sea level rise. The application of these recommendations will ensure the use of more appropriate models and techniques that will be better able to predict the success of planned restoration efforts.
Type
Master's project
Department
Nicholas School of the Environment and Earth Sciences
Subject
Florida
Everglades
restoration
CERP
Wetlands
Climate change
Permalink
https://hdl.handle.net/10161/513
Citation
Krajewski, Jennifer (2008). Restoring a River of Grass: Everglades policy recommendations for a climate change alternative. Master's project, Duke University. Retrieved from https://hdl.handle.net/10161/513.
Collections
More Info
Show full item record