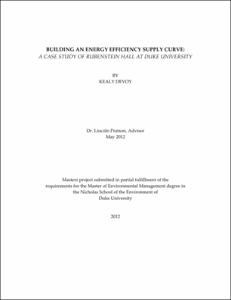 View / Download
1.5 Mb
Date
Author
Devoy, Kealy
Advisor
Pratson, Lincoln F.
Repository Usage Stats
772
views
588
downloads
Abstract
Duke University has a deep commitment to sustainability and a clear track record of constructing highly efficient buildings. The new North Carolina Building Energy Conservation Code requires that new construction be 30 percent more efficient than the ASHRAE 90.1-2007 standard. To determine the impact of meeting this new code, an energy model of Rubenstein Hall was constructed as if the building were being built new today. This model was used to assess the effect of energy efficiency projects on the building’s overall energy use. Projects fell into four categories: heating ventilating and air conditioning, thermal performance, solar gain, and lighting. The results of the analysis found that the entirety of the new NC Building Energy Conservation Code could be met through four projects, each with no upfront costs: reducing the minimum percentage of outside air to 15 percent (from 17-21 percent), altering the time at which thermostats return to set points from 5am to 7am, reducing the lighting power density to 0.9 watts per square foot (from 1.8 watts per square foot), and maximizing the window area at 30 percent of total wall area. These projects will result in a building that uses 43 percent less energy use than the ASHRAE 90.1-2007 standard, more than meeting the goals of the code. The energy efficiency supply curve generated in this report can inform decision making during the design phase of new campus buildings, as well as guide efficiency upgrades in existing buildings. Overall, Duke should have no problem meeting the NC ECC. That being said, there are still operational and physical changes that can lead to reduced energy use, which should be pursued to the fullest extent.
Type
Master's project
Department
Nicholas School of the Environment and Earth Sciences
Subject
energy efficiency
building energy modeling
building science
sustainability
building code
Permalink
https://hdl.handle.net/10161/5150
Citation
Devoy, Kealy (2012). Building an Energy Efficiency Supply Curve: A Case Study of Rubenstein Hall at Duke University. Master's project, Duke University. Retrieved from https://hdl.handle.net/10161/5150.
Collections
More Info
Show full item record