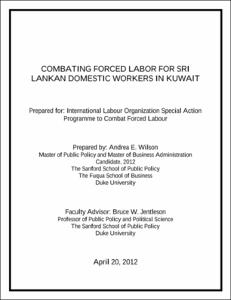 View / Download
902.7 Kb
Date
Author
Wilson, Andrea
Advisor
Jentleson, Bruce W
Repository Usage Stats
1,167
views
673
downloads
Abstract
In 2009, 94 percent of the complaints (8,811 cases) received by the Sri Lankan Bureau of Foreign Employment (SLBFE) were registered by domestic workers overseas. At a minimum, 38 percent of these complaints (3,567 cases) amount to forced labor. Female migrants in Kuwait registered 17.4 percent of the total amount of complaints. Therefore, this paper seeks to answer the policy question: how should the government of Sri Lanka combat forced labor for Sri Lankan domestic workers in Kuwait? My principal recommendation is that the Sri Lanka Bureau of Foreign Employment increase the accessibility of information about the migration process to potential migrants before they decide to migrate. Two other complementary recommendations are that the Sri Lankan government expand SLBFE’s mandate to include the regulation of subagents and SLBFE increase the amount of human rights education concerning forced labor during training for domestic workers. While I recommend both complementary recommendations be implemented, if Sri Lanka must choose one option because of limited resources, I ultimately recommend that subagents be regulated. Regulation would have a larger impact on reducing domestic worker migrants’ long-term vulnerability to forced labor. These recommendations take into account the involvement of many parties in the problem and the challenges to combating forced labor. The involved parties are both stakeholders in combating forced labor and those whose interests compete directly with those of the migrants. Some of the parties can be categorized directly into one group while others have a more complex relationship with the issue of domestic worker migration and forced labor. The following groups play significant roles in the issue of forced labor of Sri Lankan domestic workers: the migrants themselves, their employers, the Sri Lankan government, the Sri Lanka Bureau of Foreign Employment, the private migration services industry (agencies, subagent, and moneylenders), Kuwait, and other labor-sending countries. Many of the challenges to combating forced labor have been identified in the media and other reports. However, there are six challenges that have not been adequately named or addressed that are relevant to potential solutions to forced labor. The challenges include: ensuring that the Sri Lankan culture of “saving face” is taken into account; the timing of information, education, and training in the migration process; access to migration process information; lack of training; training characteristics; and the Sri Lankan government’s diverted attention from unskilled migration. To address these challenges and the overall problem eight policy options were developed: 1. Secure a memorandum of understanding with Kuwait regarding Sri Lankan domestic workers. 2. Discourage domestic worker migration. 3. Regulate subagents. 4. Increase the amount of human rights education concerning forced labor during training for domestic workers going to the Middle East. 5. Increase accessibility of migration information to potential migrants before the migration decision is made. 6. Prosecute agents who deceive domestic worker migrants by switching contracts or not delivering a contract to the worker. 7. Create a database that agents can access of migrants’ names and aliases who defrauded agents or employers. 8. Increase migrant worker access to formal financial institutions. Each option was analyzed using the four criteria of reducing forced labor in the short and long-term, minimizing the impact on the Sri Lankan government and/or SLBFE budget, and maximizing political feasibility domestically and internationally. The criterion of political feasibility had to be met for the option to be considered viable. However, it must be acknowledged that the dynamics of political feasibility can shift over time. Therefore any policy option that failed to meet the political feasibility criterion was also examined for future feasibility. In the end, increasing the accessibility of information about the migration process met and exceeded the most criteria followed by both expanding SLBFE’s mandate to include the regulation of subagents and increasing the amount of human rights education concerning forced labor in pre-departure training.
Type
Master's project
Department
The Sanford School of Public Policy
Subject
forced labor
domestic workers
Sri Lanka
Kuwait
Permalink
https://hdl.handle.net/10161/5161
Citation
Wilson, Andrea (2012). Combating Forced Labor for Sri Lankan Domestic Workers in Kuwait. Master's project, Duke University. Retrieved from https://hdl.handle.net/10161/5161.
Collections
More Info
Show full item record