The Differential Effect of Governance on Aid to the Water/Sanitation and Health Sectors: An Analysis 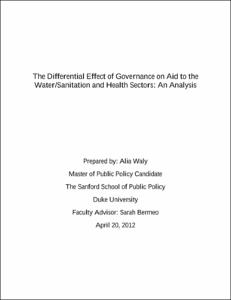 View / Download
1.0 Mb
Date
Author
Waly, Alia
Advisor
Bermeo, Sarah
Repository Usage Stats
346
views
461
downloads
Abstract
A swathe of research attests to the importance of governance in achieving economic growth and poverty reduction in developing countries. Whether governance has an equal effect across sectors, however, is a question that has been neglected empirically. This study adds to the literature by examining the differential impacts of governance on aid to the water/sanitation and health sectors. I used Ordinary Least Squares (OLS) to estimate the effect of health aid and water/sanitation aid on immunization rates and access to improved water and sanitation sources, respectively. My data on aid is from the OECD; I collected annual data for 5 aid flows: health aid, basic health aid, water/sanitation aid, water aid for large projects and sanitation aid for large projects, from 1996 to 2009. Annual data on immunization rates from 1990 to 2009 were collected from the World Bank World Development Indicators, and data on access to an improved water source and access to improved sanitation were collected from the WHO; 5 data points were available on this indicator. My covariates include governance, civil war, GDP per capita, GDP growth (percentage), decentralization, an indicator variable for Africa and log of population, which is consistent with the literature. I found that governance had a statistically significant impact on aid to the water and sanitation sectors—the sanitation sector appeared to be most negatively affected by poor governance—and no impact on aid to the health sector. These findings have potential implications for donor funding; they provide evidence that governance does not have an equal effect across sectors and that sector-level analysis of governance conditions in countries is important to undertake before giving aid. This study could also support increased aid to the water sector, as donor fears that aid will be squandered in the sector could be assuaged with these findings and the findings of other studies that (hopefully) will follow, which show that aid could be increased where good governance warrants it. While the water/sanitation sector is the subject of multiple Millennium Development Goal (MDG) targets and indicators, making it more of a donor priority than many other sectors, like production or civil society, for example, the proportion of Official Development Assistance (ODA) to the water/sanitation sector has actually decreased since 2000, when the MDGs were initiated.
Type
Master's project
Department
The Sanford School of Public Policy
Subject
governance; international aid; aid effectiveness
Permalink
https://hdl.handle.net/10161/5171
Citation
Waly, Alia (2012). The Differential Effect of Governance on Aid to the Water/Sanitation and Health Sectors: An Analysis. Master's project, Duke University. Retrieved from https://hdl.handle.net/10161/5171.
Collections
More Info
Show full item record