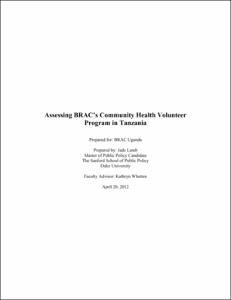 View / Download
1.9 Mb
Date
Author
Lamb, Jade
Advisor
Whetten, Kathryn
Repository Usage Stats
982
views
1,033
downloads
Abstract
Life expectancy in Tanzania is 58 years for women, and 53 for men (WHO 2011). Tanzania’s maternal mortality ratio is among the world’s highest at 454 per 100,000 births (UNDP); likewise, its infant mortality ratio is high at 51 per 1,000 live births (TDHS 2010). Overall, under-five mortality (U5M) is 81 per 1,000 (TDHS 2011), 16% of which is due to malaria, and an additional 13% to diarrheal diseases. To address these ongoing health issues in a low-cost, scalable way, BRAC began to implement a Community Health Volunteer Program in Tanzania in 2007. BRAC trained volunteers, all of whom were female and most of whom were also active in BRAC’s microfinance programs, to go out into their communities and educate community members on common diseases, identify pregnant women and new infants and encourage them to seek prenatal and antenatal care, sell over the counter medications, and post contact information for emergency first aid for children. The intervention was conducted for 3 years, until 2010. BRAC collected survey data in treatment and comparison communities assessing health behaviors such as insecticide treated net use, sanitary latrine access, contraceptive use, and antenatal care in 2007 and 2010 in order to evaluate the program. Though the scaling up of the program before 2010 meant that comparison communities received the treatment, the program was still associated with increased contraceptive use and piped water access, and a small but statistically significant decrease in insecticide treated net use. I recommend that BRAC focus any additional health programs in Tanzania on contraceptive promotion, where there seems to be an effect, and postnatal care access and antenatal care quality, where there appears to be unmet need.
Type
Master's project
Department
The Sanford School of Public Policy
Subject
tanzania
public health
community health volunteers
Permalink
https://hdl.handle.net/10161/5172
Citation
Lamb, Jade (2012). Assessing BRAC's Community Health Volunteer Program in Tanzania. Master's project, Duke University. Retrieved from https://hdl.handle.net/10161/5172.
Collections
More Info
Show full item record