Medicaid Coverage for Inmates and Reentering Populations in North Carolina 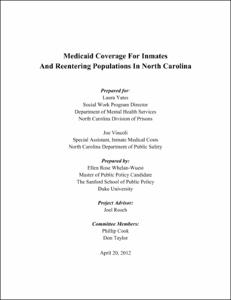 View / Download
358.8 Kb
Date
Author
Ellen, Whelan-Wuest
Advisor
Rosch, Joel B
Repository Usage Stats
1,296
views
8,402
downloads
Abstract
As part of the Patient Protection and Affordable Care Act (PPACA), Medicaid will expand in 2014 to extend eligibility for health care coverage to millions more Americans. Included among these will be those prison inmates and ex-offenders who are currently ineligible for Medicaid coverage. Corrections systems are constitutionally mandated to provide adequate health care to all prison and jail inmates for the duration of their incarceration. The expenses associated with providing this care are a leading cost driver for most state correctional systems. As states continue to battle large budget deficits, elected officials and agency leadership are increasingly motivated to reduce high prison costs. North Carolina is no exception, and in 2010 the General Assembly issued a directive compelling the state Department of Correction (DOC) to identify and implement new cost-saving measures. The result was the implementation of a new Inmate Medicaid Enrollment (IME) program that became operational in February 2011. According to internal estimations, this new program was projected to save DOC $14 million by the end of the 2011-2012 fiscal year. IME also represents a uniquely successful cross-collaboration between two large state agencies with no prior working relationship- DOC and the State Department of Medical Assistance (DMA). As more states consider similar inmate Medicaid utilization programs, North Carolina has established itself as a leader that is well poised to take advantage of Medicaid expansion and its increased federal reimbursements scheduled for 2014. In this project I analyze the process by which these North Carolina state agencies created and implemented IME, while also examining the implications of Medicaid expansion for DOC’s costs, inmate populations and reentering prisoners. The following paper offers background information on prisoner health care and medical costs; Medicaid as it currently relates to inmates and as its projected change in 2014; and the public health dynamics of prisoner health and reentry. The second section offers an analysis of IME in North Carolina, from its conception to its current operation. The third section offers projections for IME once Medicaid expansion is implemented and the possible implications for the future. Finally, I offer conclusions based on my analysis and five specific recommendations for how North Carolina can best maximize the potential benefits of IME, whether or not Medicaid expansion progresses. North Carolina’s Inmate Medical Enrollment Program is a model other states may wish to emulate in their own pursuit of cost-savings and innovative solutions to rising incarceration and medical costs. In particular, the cooperation between DOC and DMA on an administrative and personnel level indicate that complicated inter-agency programs can be successfully implemented quickly and efficiently. To build on the success of the IME program’s implementation and expand its positive impacts, I recommend DOC take the following actions: 1) DOC and DMA should educate and train county managers in the process of Medicaid utilization for enrolled inmates. While it may not be feasible to expect all 100 of North Carolina’s counties to implement their own IME program for jail inmates, even a handful of densely populated or high incarceration counties stand to reap financial and public health benefits if they follow the state model. 2) DOC should work with county social service agencies to create and implement their own IME program, whereby arrested individuals are immediately cross-referenced against Medicaid records for possible matches. In particular, NC DOC should model the Colorado Department of Correction’s jail enrollment program. DOC may consider working first with the most populated counties and those with the highest incarceration rates, as they will likely be most motivated and have the greatest staff and infrastructural resources to enact their own successful IME programs. 3) To protect the state from any legal repercussions, DOC should add an additional information search related to inmates’ family participation or ability to pay for medical care. At the very least, DOC should ensure access to contact information for inmates’ families so that those requiring hospital care are screened for any other possible payers of last resort. 4) Finally, in the event Medicaid expansion does move forward, DOC should implement a health care training process for all probation and post-release supervision officers as well as other reentry programs to maximize the potential for improved public health and reduced recidivism. With public confidence in government historically low it is all the more important and valid to analyze and credit IME for its smooth implementation as well as its outcomes. As the country faces a slow and halting economic recovery, state governments may look to the North Carolina Inmate Medicaid Enrollment Program as an example for how government can quickly respond to economic crises and create new programs that may reduce spending and result in long term community benefits.
Type
Master's project
Department
The Sanford School of Public Policy
Subject
Reentry Medicaid Prisoners Corrections Health Care Reform
Permalink
https://hdl.handle.net/10161/5174
Citation
Ellen, Whelan-Wuest (2012). Medicaid Coverage for Inmates and Reentering Populations in North Carolina. Master's project, Duke University. Retrieved from https://hdl.handle.net/10161/5174.
Collections
More Info
Show full item record